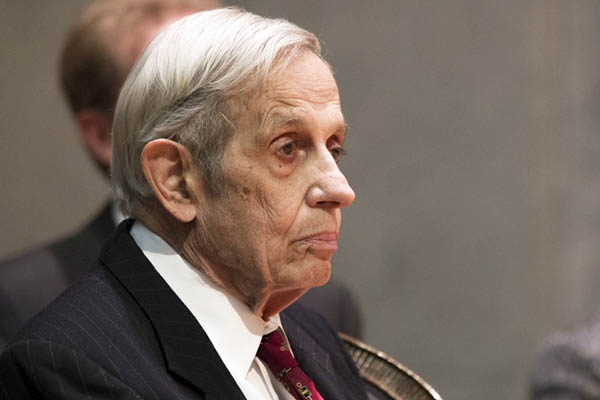 Police say the couple was likely not wearing seatbelts when their taxi struck a guardrail and another car.

Nobel Prize-winning U.S. mathematician John Nash, whose life’s struggle inspired the film A Beautiful Mind, was killed with his wife in a New Jersey car crash.

Nash, 86, and his 82-year-old wife Alicia were riding in a taxi on Saturday when the accident took place, said State Police Sergeant Gregory Williams. “The taxi passengers were ejected,” Williams said, adding that both were killed.

The Princeton University and Massachusetts Institute of Technology (MIT) mathematician is best known for his contribution to game theory, the study of decision-making, which won him the Nobel economics prize in 1994. His life story formed the basis of the Oscar-winning 2001 film A Beautiful Mind in which actor Russell Crowe played the genius, who struggled with mental illness, and Jennifer Connelly played his wife.

“Stunned… my heart goes out to John & Alicia & family. An amazing partnership. Beautiful minds, beautiful hearts,” Crowe said on Twitter. Ron Howard, who won the Oscar for best director for the film, tweeted that “it was an honor telling part of their story.”

Nash’s life took a sharp turn in early 1959 when he began suffering from “mental disturbances” that caused him to resign his faculty position at MIT. The schizophrenic delusions would end up affecting not only his career but also his marriage to Alicia, whom he wed in 1957.

The couple divorced in the early 1960s, but remained in contact and remarried decades later in 2001. By the time Nash received his Nobel Prize, his delusions had decreased.

“I am still making the effort and it is conceivable that with the gap period of about 25 years of partially deluded thinking providing a sort of vacation, my situation may be atypical,” Nash said in an autobiographical description, written at the time of his Nobel Prize award in 1994. “It did happen that when I had been long enough hospitalized that I would finally renounce my delusional hypothesis and revert to thinking of myself as a human of more conventional circumstances and return to mathematical research.”

Earlier this month, Nash and mathematician Louis Nirenberg received Norway’s prestigious Abel Prize for their contributions to the theory of nonlinear partial differential equations (PDEs) and its applications to geometric analysis.

“John’s remarkable achievements inspired generations of mathematicians, economists and scientists who were influenced by his brilliant, groundbreaking work in game theory,” Princeton president Christopher Eisgruber said in a statement Sunday.

Greek Finance Minister Yanis Varoufakis tweeted that “reading your work was inspirational. Meeting you, and spending time together, was an unearned bonus. Farewell John Nash Jr.”

Nash was born in Bluefield, West Virginia on June 13, 1928 to John, an electrical engineer, and his wife, Virginia, a former schoolteacher. He went on to study mathematics at what is now Carnegie Mellon University and received a graduate degree from Princeton, where he said he first became interested in game theory.

Nash and his wife were involved in the deadly crash at 4:30 p.m. on the New Jersey Turnpike near the township of Monroe, after the taxi the couple was riding in attempted to pass another vehicle, lost control and struck a guardrail and another car.

U.S. media reported that Nash and his wife were possibly not wearing seatbelts at the time. The taxi driver was airlifted to the hospital with non-life-threatening injuries. A passenger in the other car was taken to the hospital with neck and back pain, said Williams, the police sergeant.

100 Textbooks Banned by Punjab Curriculum Board

Pakistan Extends Till May 15 Ban on International...