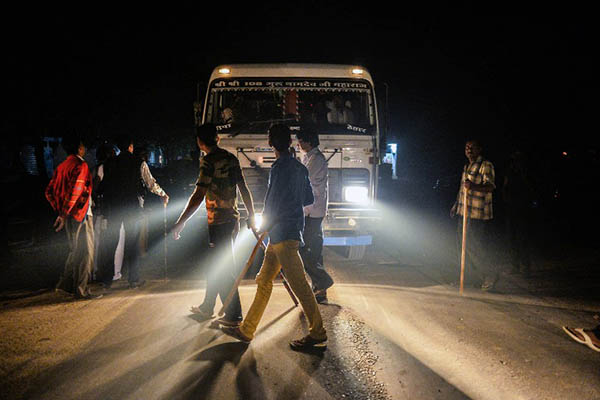 It is increasingly rare for a week to pass without new reports of Hindu mobs in India attacking members of its Muslim minority, with little—if any—response from authorities. Writing for BBC News in September, journalist Geeta Pandey noted: “Unprovoked attacks on Muslims by Hindu mobs have become routine in India, but they seem to evoke little condemnation from the government.”

Citing a video that went viral on social media in August, she pointed to harrowing scenes of a terrified little girl clinging to her Muslim father being assaulted by a Hindu mob. “The distressing footage showed the 45-year-old rickshaw driver being paraded through the streets of Kanpur, a city in the northern state of Uttar Pradesh, as his crying daughter begged the mob to stop hitting him. His attackers asked him to chant Hindustan Zindabad or Long Live India and Jai Shri Ram or Victory to Lord Ram—a popular greeting that’s been turned into a murder-cry by Hindu lynch mobs in recent years,” she added.

Pandey’s report highlighted the underlying reason for this savage action: “Attacks on working class Muslims, such as tailors, fruit vendors, electricians, plumbers and bangle-sellers, are also an attempt to take control of the political economy and jobs through religious nationalism. The religious divide has deepened. The distrust has deepened. But the hate is also for profit. The idea it to make Muslims the other, the enemy. The process of creating the other is by propagating the idea that if we don’t destroy the other, we will be destroyed. So you stoke hate, create fear, and violence is part of this larger narrative.”

Has India gone religious like Pakistan? Pakistan went religious first, after its birth in 1947, defying the worldview of its founder, Mohammed Ali Jinnah. Today, India too has evolved into a religious state defying its “founder” Congress and its Nehruvian secularism. Pakistan broke up in 1971 and Bangladesh was created because the two parts could not live together; and religion failed to last as a binding factor. India and Pakistan fought wars, thus emphasizing their different natures. Pakistan’s religious ideology could not harm Pakistani Hindus too much because there were very few Hindus living on its territory after 1971. (In 2021, 1.96 million, or 1.2 percent of the total population are Hindu, 96 percent of whom live in the rural areas of Sindh.) But Pakistan used religion to persecute the Muslim sects it didn’t like and allowed Muslim women to remain deprived of rights, especially those mentioned in religious jurisprudence.

Pakistan thought of becoming ideological from day one without knowing what that would mean. After 74 years, its Constitution has been distorted out of shape with provisions that hound minorities for presumed “blasphemy” and threaten the economy with abolition of modern banking. And there are semi-literate, bearded men of Tehreek-e-Labbaik on the roads vowing to bring the government down.

But the Bharatiya Janata Party’s Hindutva brigade in India doesn’t need a religious constitution to kill Muslims and Harijans. India began with a constitution written as a secular social contract by an untouchable scholar of great wisdom, B.R. Ambedkar. Today, India doesn’t need to amend it to become like Pakistan; imitating Pakistan, the courts in India steadily allow change of the state’s identity. Of Pakistan-India rivalry you can say that if you hate hard enough you become like someone you hate.

There was a ray of hope that the two neighbors would start behaving normally through free trade. The South Asian Free Trade Area (SAFTA) agreement that India and Pakistan signed in 2004 contains Article 8, which refers to the “removal of intra-SAARC barriers to investment” and the two were expected to move to a free trade regime by April 1, 2013. Pakistan hemmed and hawed throughout that year under Prime Minister Nawaz Sharif, who had won at the polls promising an “opening up” with India. He was supported overwhelmingly by all chambers of commerce and industry in Pakistan.

In the year 2014, too, he held back the award of Most Favored Nation (MFN) status, which India had already granted to Pakistan. Islamabad’s “non-state actors” did not want trade with India; they also had a pre-modern view of the economic function as such, and look at trade as a dangerous alternative to the sacred duty of war. Then-Punjab Chief Minister Shahbaz Sharif, through a massive slip of the tongue, admitted that “the Army didn’t want trade with India.”

The Army has a slightly different view related to geopolitics and Pakistan’s status as a crucial “median” state. Free trade with India would not only mean allowing Indian goods to conquer Pakistan but also allowing India to conquer Central Asia through a transport corridor that would run across Pakistan. There are two ways of looking at “geopolitical importance”, or two ways of deriving benefit from it. One is the “civilian” approach, which means that the geographically important state has to develop its roadways and railways and other infrastructure, such as hotels, to facilitate those who wish to pass through. Once the geographically “connective” state has become an effective corridor of passage, its “strategic” importance no doubt increases. And the dividend of this importance comes in economic terms and through an absence of war.

The other way is the “military” approach, which relies on geography as “hindrance” rather than “connection”. The military mind says: We are in the middle and we will not let you pass unless you agree to our terms. (To India, Pakistan is supposed to be saying let’s talk Kashmir before we talk free trade.) This is a warrior’s approach and signals his opposition to economic activity, concealing the real doctrine of economic development through conquest. In the case of Pakistan, it is the military view of geopolitical importance that has held sway.

But is India any more wedded to the idea of free trade? Does it realize that South Asia doesn’t trade at all within itself compared, let’s say, to the states of the Association of Southeast Asian Nations (ASEAN)? Free trade destroys many orders. It destroys the “self-sufficient” or socialist state fearing international finance. It also destroys boundaries that maintain separated identities and destroys ideologies that work only under insulation. It destroys the internal dominance of the state, too. Are India and Pakistan prepared to destroy some of their most cherished tenets?

Tribal societies, based on delimited food-scarce territories, are undermined by trade. Warriors don’t like trade and traders, but are partial to smuggling. The national security state, with a backlog of “just” wars to be fought for national honor, is aghast at the prospect of becoming “feminine” through accepting the “insertion” of enemy exports. Alas, both India and Pakistan are internationally rated as “non-exporting” countries.

The SAFTA agreement that India and Pakistan signed contains Article 8, which refers to the “removal of intra-SAARC barriers to investment” while making it possible for weaker economies to seek protection through the “rules of fair competition.” Who wants trade more, India or Pakistan? Pakistan wants it more, but its motive is “hidden” and therefore, paradoxically, noble: it wants to get rid of external war to which it contributes proxy warriors. India, on the other hand, is suspicious of Pakistani motives and, less honorably, mixes electoral politics with the question of trade. The Indian voter is angry with Pakistan, all right, but how can one remove the cause of it unless both states trade freely and allow cross-border investments?

The economist of today is the most subversive philosopher in history since Socrates. Imagine India using trade routes that spread like arteries across Pakistan’s sacred territory and the two-nation doctrine succumbing to the self-seeking passions of the non-warrior. Pakistan is a corridor of nothing, unless India violates it with its manufactures. How humiliating!

Death of culture through curriculum

The real death of Pakistan is coming gradually through the death of its culture, and finally through Prime Minister Imran Khan’s “single national curriculum” emphasizing Islam and Arabic rather than Urdu and tacitly undermining English as “an idiom of slavery.” People make fun of “enlightenment” and “moderation” because they see the anti-cultural forces within and without the state winning territory on a daily basis. (Pervez Musharraf’s decree of 2006 to remove jihad from textbooks had been ignored by the provinces and the new textbooks had actually made fun of “enlightenment” as an “alien doctrine”!)

Free trade and culture go hand in hand. The “monoculture” of free trade (read globalization) is cakes and ale compared to the “monoculture” of Pakistani nationalism as interpreted by the clergy and the army. Those who are scared of it call it Talibanization. There is no honor in heroic isolation. The pinnacle of isolation is martyrdom. Free trade may be dishonorable but it avoids death and stops poverty. Nothing is more dishonorable than poverty.

Pakistani economist-philosopher, Ijaz Nabi, once wrote: “Critically, without normalizing trade with India, the Indus Basin would be a T-junction circumscribing the welfare gains from regional integration rather than a crossroads of economic transactions. Recent studies show that bilateral trade could be as high as $10 billion.”

The irony is that if you hate someone you become like him. There is nothing original in this; India’s Gandhi had a creed based on this dictum. If India starts thinking the same way as Pakistan and allows things to slide, then there will be the fallout of Pakistan’s implosion to cope with. Islamabad should have gone ahead with the MFN, signed and ratified free trade and free movement of people and finance, and left the bilateral haggling over tariff and non-tariff barriers for later years.

But diplomacy is operated in South Asia by a give-no-quarter bunch of bureaucrats who cleave to a nationalism that continues to trump economics. Pakistan is under obligation to change its stance, make groundbreaking decisions and get them approved through statesmanship. But its diplomats stay close to the foreign-policy orthodoxy, its sense of unrequited grievance and, without knowing it, the non-state actors. National interest rather than “reciprocity” should have guided Pakistan’s decisions about trade with India.