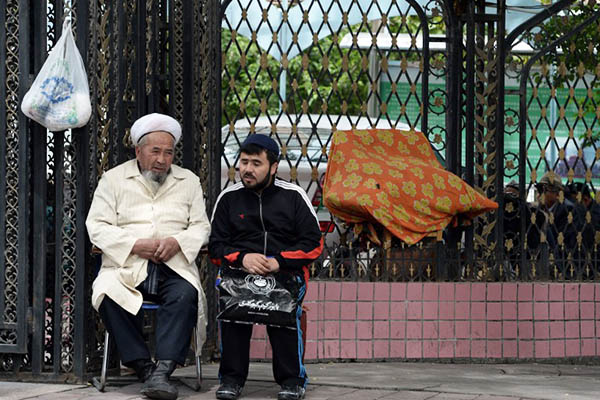 Tough religious restrictions on Muslim minorities in China’s far west may have driven more than 100 to join the Islamic State group, a U.S. think tank said on Wednesday.

Beijing has long claimed that I.S. is recruiting Uighurs from the mainly Muslim region of Xinjiang, and blamed outside forces for fomenting deadly acts of violence there and elsewhere in China that have claimed hundreds of lives. At the same time, authorities have banned or strictly controlled the observance of certain Muslim practices, such as growing beards and fasting during Ramzan, saying they are symbols of “Islamic extremism.”

Those policies “could be a push factor driving people to leave the country and look elsewhere for a sense of ‘belonging’,” the Washington, D.C.-based New America Foundation wrote in a study of leaked registration documents for I.S. fighters.

The findings were based on data from more than 3,500 foreign recruits provided by a defector from the jihadist organization.

Of those, 114 came from Xinjiang, the study says, making it the fifth highest contributor of fighters among the provinces and regions named in the data—after three areas in Saudi Arabia and one in Tunisia. Overall, recruits were more likely to come from “regions with restive histories and tense local-federal relationships,” the report said.

Beijing regularly accuses what it says are exiled separatist groups such as the East Turkestan Islamic Movement (ETIM) of being behind attacks in Xinjiang, which has seen a wave of deadly unrest. Britain’s upper house passed an order last week adding the group to a list of terror organizations.

But many independent experts doubt the strength of overseas Uighur groups and their links to global terrorism, with some saying China exaggerates the threat to justify tough security measures in the resource-rich region.

All the Xinjiang recruits named in the I.S. documents listed their place of origin as Turkestan or East Turkestan, the name for the region often used by separatists. Even so, the study found that the recruits had no prior experience with jihad, presumably including ETIM, raising questions about China’s official narrative of radicalization in Xinjiang.

On average, the fighters from Xinjiang were less educated, less well traveled, and more likely to be married than others who sought to join I.S. They also claimed only a low level of religious training. The data included a number of registration forms for children, including one as young as 10, the paper said, and “several of the forms for these children explicitly stated they joined ISIS with their families.”

In March 2014, 31 people were knifed to death at a train station in Kunming, in southwestern China, with four attackers killed, with Xinjiang separatists blamed and state media dubbing it “China’s 9/11.”

Two months later a bomb rocked the main train station in the Xinjiang regional capital Urumqi as President Xi Jinping was wrapping up a visit, and authorities launched a “strike hard” campaign in the area. Later that year 39 people were killed in a bloody market attack in Urumqi.

The crackdown has seen mass trials and multiple executions.