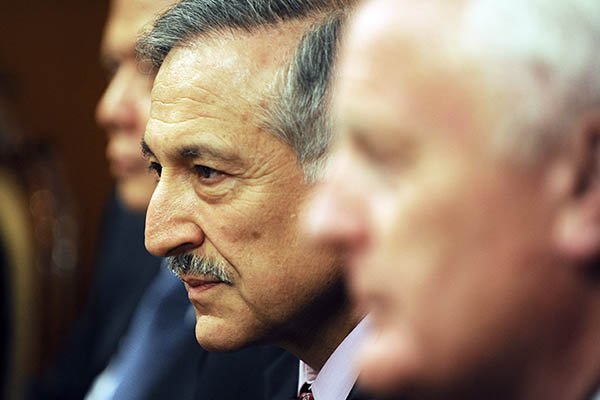 Heraldo Muñoz, who led the U.N. inquiry into the assassination of Benazir Bhutto, says the former Pakistani prime minister’s own security failed her, and that those who encouraged her return from self-exile did not provide her adequate protection.

Bhutto was assassinated in a gun-and-bomb suicide attack on the election trail in Rawalpindi on Dec. 27, 2007, plunging Pakistan into shock, disbelief, and chaos. She had been poised to become Pakistan’s first thrice-elected prime minister. The Pakistani Taliban originally took responsibility for her assassination.

Muñoz, now an assistant secretary-general at the U.N., has authored Getting Away with Murder: Benazir Bhutto’s Assassination and the Politics of Pakistan, which is based on the Chilean diplomat’s 2010 report for the United Nations.

“She was clearly a target for the Pakistani Taliban and Al Qaeda for sure,” Muñoz said in New York at the launch of his book. “Sectors of the Pakistani establishment also wanted her dismissed or dead.” He added that the police were “clearly responsible for a cover-up and I’m convinced that came from higher up.” Muñoz said Bhutto’s death could have been prevented, and that Pakistan deliberately failed to investigate the assassination properly. “Political actors, even those close to her, would rather turn the page rather than find out who did it,” he said.

Comparing Bhutto’s assassination to a collective murder plot in the 17th-century Spanish play Fuenteovejuna, in which a village united together to kill a hated commander, Muñoz said that Al Qaeda wanted Bhutto dead and that the Pakistani Taliban executed the attack—possibly with support from rogue intelligence agents.

Muñoz dismissed allegations that Bhutto’s widower, former president Asif Ali Zardari, may have been complicit in her death. “He was helpful, but I cannot say his whole government was helpful because we encountered all sorts of obstacles.”

At one point, the U.S. government suggested to Bhutto that she hire the security firm formerly known as Blackwater, said Muñoz, but then-president Pervez Musharraf refused to let foreign agents in. Asked whether he feared for his life during his investigation, Muñoz said “not really,” but revealed that around January 2010 he was forced to step up security. “I got a warning from a very trustworthy source that ‘these people’ are capable of anything and ‘these people’ don’t know the world,” he said. Although he never knew who “these people” referred to, “I thought maybe we were stepping on some toes.”

Muñoz said former interior minister Rehman Malik, Bhutto’s head of security, had been in a backup bulletproof Mercedes but was nowhere to be found immediately after the attack. “They probably wanted to save their skin, to put it bluntly … Never could we get straight answers from him.” Muñoz said guilt was for the courts to decide, but that Musharraf bore “political responsibility” for not providing enough security to a former prime minister living under threat.