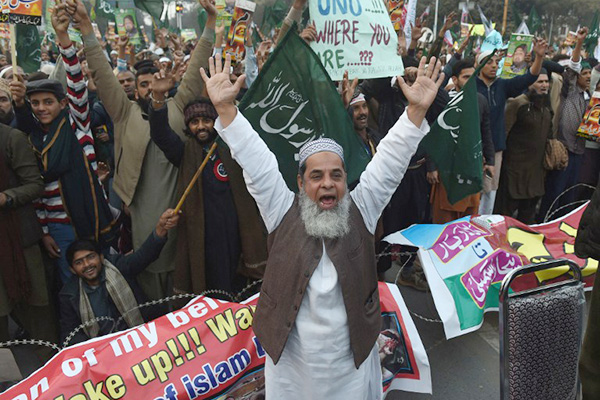 The rise of reactive terrorism in Pakistan.

On Jan. 4, the anniversary of the 2011 murder of Punjab governor Salmaan Taseer by a policeman in Islamabad, a group of Barelvi clerical parties announced they would lay siege to Liberty Market, where Taseer’s supporters were to gather and mourn his death. Taseer was killed because he opposed Pakistan’s blasphemy laws; the clerics and their large following wanted to use the anniversary of his death to venerate his killer, Mumtaz Qadri and showcase their outrage over the assassin’s hanging in February last year.

The Punjab administration may be accused of overkill in the preventive measures it undertook on Wednesday, as large shipping containers blocked major arteries, causing a massive traffic jam citywide. However, their concern was merited. Last year, after Qadri was hanged, Barelvi clerics rioted in Islamabad and mustered over 25,000 ready-to-die devotees, who proceeded to threaten Parliament House.

The Barelvi sect of Sunni Islam practises mystical quietism based on the person of Islam’s Prophet. This kept them out of the Saudi-Wahhabi-funded covert jihad in Afghanistan and Kashmir in the 1980s under General Zia-ul-Haq. The resultant dominance of Deobandis led to the forcible takeover of Barelvi mosques in the big cities, particularly Karachi, where a suicide bomber killed the top Barelvi leadership in 2006 in what is known as the Nishtar Park Massacre.

Led by Sarwat Qadri, the Sunni Tehreek responded to this by aligning itself to Karachi’s criminal underworld. It has become rich through the collection of “protection money” and target killing and now calls the shots across Pakistan wherever Barelvis come under pressure from hardline Islam. Their current agitation is based on the protection of the flawed blasphemy law, which tends to target non-Muslim Pakistanis and Muslims who object to the legislation. Pakistan’s strategy of proxy jihad has thus produced an “accidental” reactive terrorism that can only threaten to destabilize the state further.