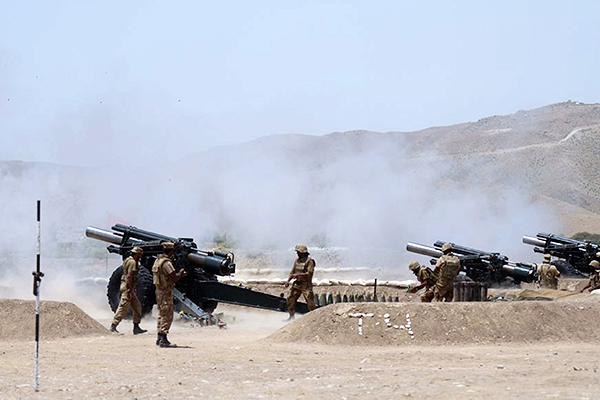 Just as the military announced the ground phase of Zarb-e-Azb, the ongoing counterterrorism operation in the federally-administered North Waziristan tribal agency, former military spokesman Athar Abbas told the BBC that the operation had originally been planned for 2011 but was delayed because of the then Army chief’s “hesitance.”

“General [Ashfaq] Kayani thought he would be held accountable for sending troops into North Waziristan,” said Abbas. “That is why he dillydallied on the operation due to which we wasted too much time and suffered losses … The country, its people, the government, and the Armed Forces had to pay a heavy price for [his] hesitance.”

What Abbas has revealed is not exactly new information. The former director-general of the military’s Inter-Services Public Relations has simply put on record what several journalists already knew from on-background discussions with military officers.

On Monday, Abbas told me Kayani’s indecision had raised the costs of deploying troops in North Waziristan. “The [militants] controlled the area and they were free to muster resources there. They planned operations from there, trained hard there—and had the space to do so.”

Other Army officers, including those who served in the area, have said much the same on background. North Waziristan was not without Army or Frontier Corps presence prior to Zarb-e-Azb, yet, as Abbas put it to me, “There was no government writ. The [militant] groups had the run of the area, and troops had been placed in an untenable situation.”

In June 2010, I visited the North Waziristan towns of Miranshah and Razmak and saw that the deployed troops were largely confined to their posts and garrisons. Army convoys moved sparingly and had to go through the costly and grueling exercise known as Road Opening Day for sizeable movement. Even so, there was nary a road movement which did not suffer an IED attack or ambush. “There was much frustration among the officers and soldiers,” says Abbas, “about having been put in a war zone with their hands tied.”

What kept the Army from not launching an operation in North Waziristan, especially since it had earlier cleared the Mehsud triangle in South Waziristan and knew that the bulk of the Pakistani Taliban had relocated to North Waziristan?

Says Abbas: “When [the 2009] Operation Rah-e-Nijat in South Waziristan was in its final phases, the Army had sent a warning to the Dawar and Utmankhel Wazir tribes in North Waziristan to not host the Pakistani Taliban and its affiliate groups or else [the Army] would come after them regardless of any deals and agreements.” The warning didn’t work.

The issue about delaying action in North Waziristan becomes even more intriguing in light of a conference held at the Military Operations directorate about four years ago. At this conference, Kayani directed the then Inter-Services Intelligence chief, Lt. Gen. Shuja Pasha, to lay the ground for an offensive through dedicated intelligence work. He also directed the then Commander 11 Corps, Lt. Gen. Asif Yasin Malik, who is currently the defense secretary, to prepare for a ground offensive. Abbas says the preparations were to take about a year and the plans looked at 2011 for a cleanup of North Waziristan.

Abbas explains the lack of follow-up thus: “[Kayani] thought that if we moved in, we would be fighting against the tribes. He also argued that NATO-ISAF should have gone for a surge in Eastern Afghanistan rather than Southern Afghanistan and felt that, given their thin presence west of North Waziristan, there would be no force blocking elements fleeing the operation in the agency.” These arguments, while not exactly invalid, could not have been the deciding factor in Kayani’s indecision. For one, thin NATO-ISAF presence to the west did not impede the South Waziristan operation.

Kayani’s other arguments, as listed by Abbas, appear more plausible. He thought that without political consensus it would be difficult to sell the North Waziristan operation. There were also concerns about how to deal with elements of the Haqqani network, and the fallout of such an operation, which could disperse hostiles across the country.

Additionally, 2011 was a troubled year for Pakistan-U.S. relations. With Raymond Davis, Abbottabad, and Salala, Pakistan became extremely concerned about U.S. plans in the area. The biggest problem was the Americans. Revelations about their covert activities and their overt pressure on Islamabad to “do more” was the combination that did more to delay the North Waziristan operation than anything else.

After his retirement, Pasha told me that the feared dispersal of militants from North Waziristan to other parts was not a problem; that it is easier to pick up people once they leave the tribal areas and move to the settled areas. This is correct in theory. In practice, this requires a counterterrorism capacity (following the money, tracking communications) that is not in evidence, as proven by the discovery of Osama bin Laden in Abbottabad and by major attacks like that on Karachi Airport.

By 2012, it had become clear that a North Waziristan operation was needed. (I had written against it in the previous year, but, in light of new facts and with the benefit of hindsight, rethought some of the assumptions that underpinned my own understanding of the situation at the time.) It had become evident that the Haqqanis, while not directly hurting us, were no help in reining in the Pakistani Taliban. Whether this was because they did not want to offend them or were hand in glove with them is irrelevant. In fact, back in January 2011, neither the Haqqanis nor the Afghan Taliban could save Colonel Imam (Sultan Amir Tarar), who was highly respected by the Afghan Taliban and was shot at pointblank range by the Pakistani Taliban in the presence of Hakimullah Mehsud. And Hafiz Gul Bahadur, who lords over the Utmanzai Wazir tribes, despite an agreement with Pakistan was not only harboring foreign elements but his men were directly or indirectly also attacking our troops.

Zarb-e-Azb is an operation imperative for the physical dominance of the agency, even though it has come three years late and won’t solve the problem of terrorism in and of itself. But it is a necessary battle in a long war.