Home Opinion Between the Shameful and the Shameless

Between the Shameful and the Shameless

Bound by tribal pride, sorry seems to be the hardest word for Imran Khan.

Imran Khan, who probably named his party Pakistan Tehreek-e-Insaf while thinking how insaf (justice) was lacking in Pakistan, in no small part owed to a judicial system that the executive had tamed over time. One powerful plank of his party has been support for the independent judiciary that began its journey after the famous Judges’ Case of 1996.

Khan says he has evidence of rigging aimed at defeating PTI during the 2013 elections, and he has been complaining about it in his characteristic bruising style. He called the performance of two overseeing institutions—the Election Commission and the Supreme Court—“sharam-naak” (shameful) while referring to the juggling of dates for the presidential election between the two after a reference to the Supreme Court by a Pakistan Muslim League (Nawaz) leader. 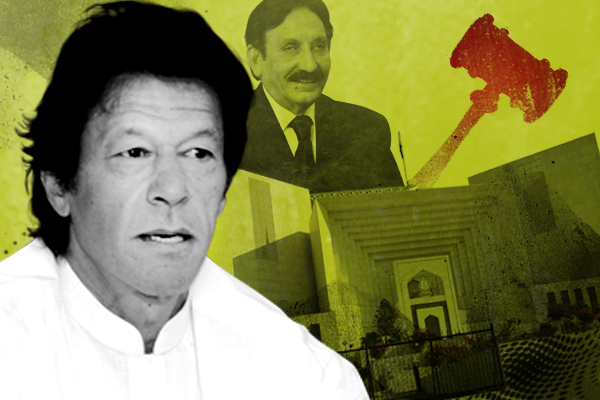 The Supreme Court thought that the word constituted an insult and that contempt under law may have been committed, and sent Khan a notice about it. We all know that in practice if the court feels insulted you can hardly challenge it. The best course is to apologize—the phrase this writer has often used to save his skin in courts is the generic “I throw myself at the mercy of the court”—after which the court gracefully forgives. Of course, all are equal in the eyes of the law, which is a blindfolded goddess. But in reality it is not so.

The present Supreme Court is no ordinary court. When it put the executive back in its constitutional place after its restoration in 2009, it had more muscle than its predecessors. Lawyers, not always nonviolent, were out in the streets supporting it. By the same token, Imran Khan is no Babar Awan, an ex-law minister in the previous government who abjectly apologized for alleged contempt and whose case is still pending. Reality overshadows legality. The best courts in the world have recognized this fact.

Honor is a tribal value and has caused humanity to resort to violence in history. But civilization has pushed honor back in order to achieve objectivity needed for the dispensation of justice. In the West, honor has faded over time yielding ground to municipal law which hardly recognizes honor as a value. Honor, when satisfied, has an element of excess in it, which actually replaces justice with revenge. No one fighting for honor, therefore, achieves justice acceptable to all parties involved.

Imran Khan says his word “sharam-naak” was not insulting because he had actually meant “embarrassing” by it. It is surprisingly true that if he had said “sharmindigi” instead, it wouldn’t have offended so much. What the two sides are tacitly discussing is “ghairat” (honor). Khan’s first Urdu book was titled Ghairat-mand Pathan (The Proud Tribesman) and the Supreme Court, too, has given ample proof that it cares for its amour-propre as no doubt sharpened by a series of directly challenging remarks by the likes of Pakistan Peoples Party’s Sen. Aitzaz Ahsan and a number of Awami National Party leaders. Musharraf’s lawyer, Ahmad Raza Kasuri, who has the habit of bursting into tears, often states that there can be no justice as long as the current chief justice is heading the Supreme Court.

If you set aside the dubious and subjective value expressed by honor in our parts, “sharam” means “veiled” in Persian; and “bay-sharam” means “unveiled.” Thus “sharminda” simply means “revealing.” In Urdu lexicology, it is often used in relation to “meaning” after it has become clear. Why should “sharminda” be harmless and “sharam-naak” so insulting? What if Khan had said “shameful” in English? Chances are that the court would not have taken umbrage. In our homes, what our children often say in English can’t be said in Urdu. “Shame” in English comes from the same root as “harm” or “damage,” as in the French “dommage.” “Scam” is another form of the same word.

Yet, some TV commentators say, had Khan said “embarrassing” in English, it would have passed the muster of decent speech. Intriguingly, “embarrassing” literally means “putting behind bars” in its etymology. The truth is that Imran Khan stands for ghairat and has been made more prickly by America’s perceived violation of it. The court is equally rendered thin-skinned by the daily barbs it has to suffer after its forays into governance which unfortunately conforms to the abysmal Third World norm. And that norm includes the lower courts.

Result? The court will be gracefully forgiving after Khan’s Western-trained lawyer—and relative—Hamid Khan applies the poultice of suitably conciliatory argument.

He should not say sorry. This imbecile CJ needs to be told a few things.

So dear Tashfeen, next you will also be saying, “I did not know, imbecile is an insulting word”

Autocratic and dictatorial perceptions of the powerful kings, lasted for centuries , particularly in the ind-pk subcontinent. Democracy and constitutionalism is not a HOME-GROWN perception.
Unfortunately RULE OF LAW is not differentiated from RULE -OF RULERS, OF RULE MAKERS .OF JUDGES ( LAW INTERPRETERS & LAWYERS )
Right of Freedom expression has had long and bloody history. WORDS are the notorious codes mutually agreed, debated and disagreed BUT they cant carry 100% true Feeling, Ideas and Thoughts. If 100% accuracy was possible there would be disputes and conflicts.
The code which the sender uses is not always interpreted by the receiver in the same spirit.
Even the fundamental law ( constitution) created lot of conflicts and confusion. The nation hearing of the proceedings in apex courts have been painful exercise without much of fruitful results. Poor Pakistanis beg for some remedy and relief, that unfortunately has no priority.
Hopefully some one realizes the irremovable fault in the art and science of COMMUNICATION . Relax and learn pragmatic attitude.

The contempt only is relevant to apex courts ?
Anny one else can be ridiculed, abused ,humiliated ,and insulted.?
Are we all equal before the Law. We we born with EQUAL HUMAN RIGHTS and DIGNITY ?
What has created the inequality.?
DIVINTY, RISALAT , ADALAT…… cannot be conceived at the alter of HUMAN DIGNITY.!!

What about the Musharraf, Imran has supported the same thing against Musharraf even more humiliation.
Where is the Tehreek-e-Insaf when the case of the murder of that Bugti was tagged to Musharraf, Bugti who bombed Sui Installations, Murdered I don’t know how much Civilians and Army guys, even he wrote in his book about that.
Where was he when TTP is bombing PPP, ANP and MQM election camps and killing thousands while he is campaigning and thanking TTP not to bomb his camps and people?
He is just another cowered secret Agency puppet doesn’t know about Politics and especially about Pakistan except blaming others…

Ignorance is bliss! Knowledge is torture!

LOL. Ahmad Raza Kasuri, who has the habit of bursting into tears

Nicely written… gr8 read on the history of the word “sharam.”

As far as point is concerning with word “Sharamnak” its just a word & not at all sense of Grieves or any thing else by which any body trying to ruining the status of apex courts. what happened when raymond Davis was released by just few pennies of Qassass. Where courts was gone & never implied any sense of responsibility. Why the Judge announced the ordered to released the deceased person to out of country? Why on earth Americans provided the security to RD? did we lack of forces to secured the RD? why Didn’t court put the pressure to Alleged judge who provided relieve for security purposes & fled away to another state? theses thinks are shameful & awful but never recognized by Apex courts. this is brutility of Justice by which single & minute things getting judiciary itching. These are just few instances i had shared with all to you other wise i felt a lot of shame & disgust to listen about stands on Imran Khan by SC. but i must say judiciary must pursue the importance of importance of Needs & necessities of the matter of Facts other wise all would be vanished out & nothing would be perfect for survive,

I think we are all digressing. Some people are blaming IK for being a big mouth and also having double standards and not condemning others e.g. TTP etc., which is besides the point. Some others are criticizing court for their behavior in general and also in special with regards to general election as well presidential elections, which again is not exactly relevant to the matter and the stance IK has taken. Some have gone into great detail of the origin of the word. Let us look at what IK actually said and what it means. He said “sharam nak”. The question is does it mean “shameful” as everybody thinks or does it mean “embarrassing” as IK claims, and in fact insists upon, and secondly, does any of these words mean a contempt of court. I am leaving my views reserved at the moment but am just making an attempt to direct the discussion in a meaningful and objective direction

I think rather than discussing the past conduct of IK and the superior courts, let us stick to the point i.e what does the word “sharam nak” translates to in English, and whether it comes down to contempt of court or not.

PTI has emerged as a leading party working for the oppressed masses and the Hon’able SC protecting their rights against the powerful corrupt elite club for the first time in the country’s history. Given the nobility of the causes of both (i.e public interest), it is difficult to understand that there is anything more important for either of them. An amicable solution to this problem of sharamnaak will be in the best interests of the oppressed people of Pakistan. It must not be the ‘tribal pride’ which should be the deciding factor for Imran Khan as the matter at hand is too serious. Hope that better sense will prevail on August 28.

I agree with you

Both Justice Iftikhar Muhammad Chauhdary and Imran Khan have worked tirelessly for the oppressed people and have antagonized the corrupt ruling elite in the process. Who will gain from their fight and who will be the losers is only too obvious. That’s why I have always stood for the amicable solution of the issue. It must not be the ‘tribal pride’ which should guide Imran Khan or the Ho’ble CJP but the larger national interest.