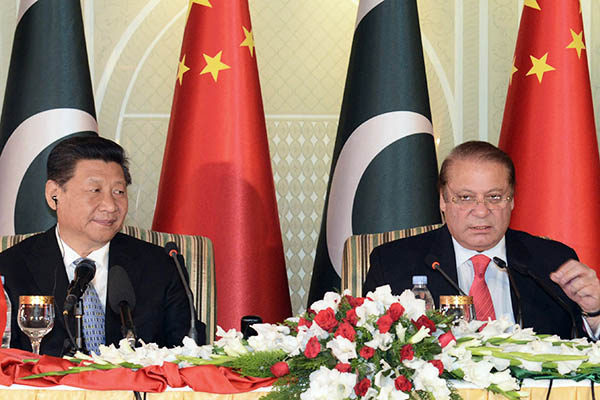 Islamabad needs to ensure that its ties with Beijing are not restricted to maudlin hyperbole.

Therefore the skillful leader subdues the enemy’s troops without any fighting; he captures their cities without laying siege to them; he overthrows their kingdom without lengthy operations in the field. With his forces intact he will dispute the mastery of the Empire, and thus, without losing a man, his triumph will be complete. This is the method of attacking by stratagem. The Art of War, Sun Tzu – Attack by Stratagem.

President Xi Jinping was here, greeted and feted by the civilian principals as well as the military leadership. His two-day visit, going by the commentary on TV channels and speeches by Pakistan’s political leadership, was a veritable adjectival extravaganza. Mountains were scaled and depths of the oceans plumbed. At one point, even ‘iron’ was mentioned with reference to the strength of bilateral relations. The hyperbole that comes to us easily was on display in its most effusive, maudlin and, often, cheesy form.

And yet, interstate relations are never about poetry. They are a function of cold, deadpan prose. True, gestures are important. But gestures only go this far and no more.

There is money in this for us: $46 billion is no small amount even if spread over 15 years. China will be investing this money to make the China-Pakistan Economic Corridor (CPEC) work. The corridor will create a network of roads that will link Pakistan’s Gwadar Port with Kashgar in China’s restive western Xinjiang province.

That makes us happy, as it should. But the question is: why would China invest so much money if this were only about our uplift?

The answer is not difficult to find. The project is good for us but it is equally, in fact more, advantageous for Beijing.

Back in November 2011, then-U.S. Secretary of State Hilary Clinton floated an updated version of the New Silk Road initiative. The idea was grounded in making Afghanistan the hub of economic activity and for that country to serve as a bridge between South and Central Asia. Economic linkages were meant to not only enhance cooperation and increase interdependencies but to address security challenges by changing the nature of the socioeconomic landscape in the region. The U.S. was to be the guarantor of this multi-state enterprise.

In 2013, Xi Jinping, during a visit to Kazakhstan, unveiled his idea of Silk Road Economic Belt. Xi’s SREB is the umbrella concept under which China aims to launch the new Maritime Silk Road, the CPEC, and the Bangladesh-China-India-Burma Economic Corridor (BCIM). During Xi’s September 2014 visit to India, the joint statement, put out on Sept. 19, talks about the BCIM in paragraph 20 thus:

“The two sides noted the progress made in promoting cooperation under the framework of the BCIM [Bangladesh, China, India, Myanmar] Economic Corridor. Both sides recalled the first meeting of the Joint Study Group of BCIM Economic Corridor and agreed to continue their respective efforts to implement understandings reached at the meeting.”

China is not only competing for influence in the region with the U.S. (and Russia), but is projecting itself as the regional leader by initiating what it calls “periphery diplomacy”. China fears that the security situation in Central and Southern Asia will become perilous with diminishing presence in Afghanistan of U.S. forces. That, Beijing figures, will have an adverse impact on its western Xinjiang province, already troubled because of repression of the Uighurs and the presence of ETIM (Eastern Turkestan Islamic Movement).

Given the number of states on its ‘periphery,’ Beijing has embarked on an ambitious and bold policy of ‘periphery diplomacy’. In October 2013, speaking at the first annual conference on periphery diplomacy, Xi presented China’s three salient points for the policy: good neighborly relations, peace and security and mutual prosperity. The policy presents China as the benign patriarch that will remain “sincere and tolerant” in its dealings with all its neighbors.

As the world’s largest economy now but still short of being its leading power, China is playing a long-term, patient game, starting in its neighborhood. Beijing believes—and hopes—that geo-economics will have a positive impact on geopolitics and through China’s largesse could create a landscape favorable for Beijing. It is a non-extractive approach by a country that is poised to play a global role. But it is not about equality. It is about being in China’s sphere of influence.

China wants to play a similar role with India but realizes that New Delhi, which has its own machtpolitik aspirations in the region and beyond, needs to be balanced while being coopted. The relationship is tense and tenuous but growing. There is also the U.S. factor in the Sino-India equation. New Delhi’s diplomacy seems geared toward playing ball with China while using its strategic partnership with the U.S. to balance the expanding Chinese influence in the region. As the situation stands, China and India are dealing with each other cautiously. Neither can afford a confrontation and both understand the positive outcomes of cooperation. Yet, both also have ambitions to project power.

Pakistan can either decide to play a subsidiary role, rest happy with being a small cog in a bigger machine, or be proactive. Put another way, Pakistan can either put all its eggs in China’s basket because of its adversarial relations with India and given India’s ambitions—example: be unto China today what it was unto the U.S. in the 50s and 60s—or play the game more smartly and become a player rather than being head-lugged in whichever direction Beijing might want to pull the leash.

To ensure that this is not misconstrued, let me iterate: Pakistan’s relations with China are vital. But, equally, Islamabad has to be clear about its own nuisance value instead of merely genuflecting before Beijing and singing effusive praises of China’s generosity. There is in what China is doing much for China. If that weren’t the case, Xi would not be putting in the money he has signed on. No state rises from its ashes, as China has done, by running international charities.

Take for instance the references in the joint statement about mutual security. While ETIM is directly and clearly mentioned, there has been no mention by Beijing of the Kashmir dispute. It’s rather simple: China considers relations with India important and wants Pakistan to straighten the kinks in its [Islamabad’s] relations with New Delhi. Similarly, China does not want to wean Pakistan from the U.S., though it wants, nonetheless, to emerge as the mentor. Beijing’s idea of strategy is very non-Punjabi and definitely very different from the ‘vision’ contained in Urdu-language columns, exceptions granted.

Also, in case anyone missed the fine print. The money is there but so is the hard work Beijing expects Pakistan to do. We are told that the Pakistan Army has decided to raise a division-strength security force to guard the corridor roads. While it is important to have the ability to enforce the state’s writ, security forces cannot do the work of aggregating interests, which is the only lasting way of securing the state’s writ and interests by giving the people a stake in the state’s survival.

Non-state actors are not just fleas that can be swatted. The U.S. thought they were and has learnt the lesson to the contrary the hard way. ETIM is not just Pakistan’s problem. It is China’s problem and the history of Uighur separatism goes deep and is owed to the shabby way in which the Han majority has treated the area. When people are repressed for long, they rise up. China might expect Pakistan to swat the ETIM cadres on Pakistani territory, but it needs to do its own work to give back the Uighur their dignity. If the onus for all the fighting is placed on us and if the two states decide that the only way to deal with the problem is through use of force then the problem is unlikely to go away.

The fear is that while China is playing on a much bigger canvas, we are making statements about joint security and standing with China regardless of the weather conditions rather cavalierly.

Xi knows his Art of War. Do we?