Home Culture Beyond the Crusades 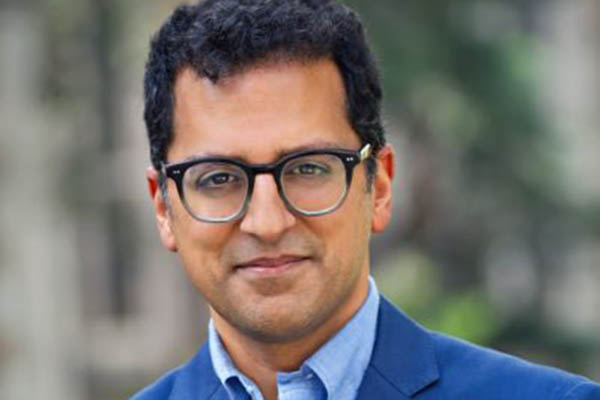 This January, Hussein Fancy, an American academic of Pakistani origin, received the Herbert Baxter Adams Prize, awarded annually by the American Historical Association “to honor a distinguished book published in English in the field of European history,” for his groundbreaking work The Mercenary Mediterranean: Sovereignty, Religion, and Violence in the Medieval Crown of Aragon. This isn’t the first prize awarded to this book: it had earlier been the recipient of the Jans F. Verbruggen Prize from De Re Militari for the best book in medieval military history and the L. Carl Brown AIMS Book Prize in North African Studies. These three very different prizes, each with different parameters, indicate the range and importance of Fancy’s research.

Through his exploration of the relationship between the Christian kings of Aragon in medieval Spain and their privileged, deeply religious Muslim soldiers, the jenets in the 13th and 14th centuries, Fancy sheds new light into “the interactions between Muslims and Christians in the Middle Ages” in a bid to “rethink the study of religion more broadly.” He questions the view of modern scholars that these Muslim-Christian alliances were essentially political and secular. He concludes instead that the Muslim jenets were deeply religious. They were originally Berbers from North Africa where they were known as al Ghuzah al Mujahid and their collaboration with the Christian kings of Aragon “was neither opposed to something called religion, nor reducible to it.” Instead, he traces feudal concepts of sovereignty, ownership and exceptionalism, which entitled the jenets to special privileges and honors. He looks at the new military techniques they brought with them too, linking this to Aragon’s battles for power on both sides of the Mediterranean. He also explores Aragon’s relationship with the Muslim kingdom of Granada which, in turn, maintained Christian soldiers.

An Associate Professor at the University of Michigan, Fancy discussed his award-winning book and his future projects with Newsweek Pakistan via email. Excerpts:

Congratulations on receiving three such prestigious awards for The Mercenary Mediterranean, which throws new insights into religion, politics and statecraft in medieval Iberia. What led to your interest in the subject?

Like much else, academic research is capricious. I never set out to write this book but rather was drawn in the challenges of the archive, in which the story happens to reside. Outside of the Vatican Archives, the Archive of the Crown of Aragon in Barcelona is the largest medieval archive in Europe and North Africa. It contains millions of records that document daily interactions between Jews, Christians, and Muslims in the Middle Ages, and it contains texts in Latin, Romance, and Arabic. All this would be fascinating enough, but the archive is also exceptional in that it contains no catalog and the slimmest of guides for researchers. In other words, one quickly finds oneself adrift in a sea of the unknown with surprises at every turn of the page, surprises that have the potential to upset received knowledge. It is here that I first stumbled across the records of the jenets, Muslim soldiers who served as the personal protectors of the Christian kings of the Crown of Aragon for a century.

The book explores the relationship between the Christian kings of Aragon and the jenets, their privileged Muslim soldiers, and it takes a new look at religious interaction in medieval times. How did the book evolve?

For the handful of scholars who have examined the jenets and for historians of medieval Spain in general, this history of interaction was often seen as “boundary-breaking.” Explicitly or implicitly, scholars have been drawn to similar stories of interaction because they tell a welcome story, one of the ability of individuals to rise above religious differences. Over the four years of research that I completed for this book, reading through hundreds of thousands of records, I found the archive rebarbative, resistant to the kinds of stories that I wanted to tell.

The jenets were not precursors of my modern, liberal ideas. In that sense, the research and writing of the book forced a reorientation, perhaps even a reversal, of my initial outlook and required me to approach the sources on their own terms as best I could. Is it possible that the jenets’ service for a Christian king could have served religious ends? And why do we, the modern readers, find this a challenging notion?

What is the historical connotation of the word jenet? What bound these Christian kings and these Muslim warriors?

The term that regularly appears in the Romance and Latin documentation of the records of the Crown of Aragon archives for these soldiers is “jenetus,” “genet,” and a handful of other orthographic variants. In itself the word jenet presents an impasse. It is a word that has had an extraordinary afterlife in Spanish and Catalan, becoming synonymous with horse-riding. Such was the success of these soldiers that they died a form of genericide, losing their specificity over time. In the 13th and 14th centuries, however, jenet referred to North African Berber horsemen and even more particularly, a particular style of riding horses, a light cavalry style, that allowed soldiers to attack and retreat quickly, a style that was virtually unknown in Europe before the arrival of the jenets. Nevertheless, the importance of the jenets lies not only in hippology or martial history, but also in the curious alliances that these North African soldiers built with the Christian kings of the Crown of Aragon and Castile in the later Middle Ages, alliances in which these soldiers acted as the kings’ personal armies, protectors, and even on occasion, private entertainment.

The fact that these Crusading kings, who identified themselves as Christian holy warriors and dedicated themselves to wresting land from the Muslim rulers of al-Andalus—Islamic Spain—also depended upon Muslim soldiers is the knot which this book hoped to unravel. I argued that the answer lies in looking beyond pragmatism as the sole answer. 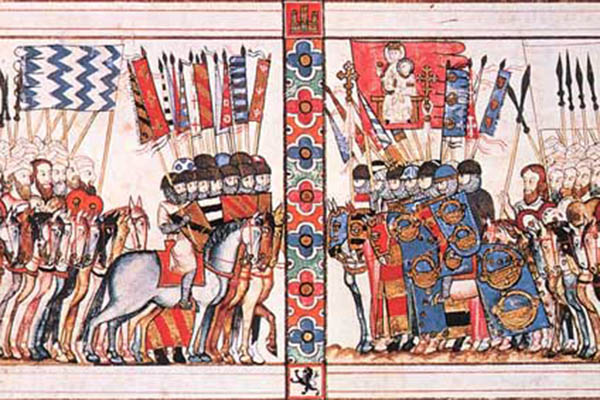 What was the relationship between political sovereignty, law and faith in mediaeval Europe—and indeed feudal concepts of kingship that gained currency under Frederick II, the Holy Roman Emperor?

In order to make sense of the jenets, one needs to look at the manner in which Christian kings articulated their authority, the manner in which religious and political ideas tumbled forward together. The 13th century, in particular, marks an important moment of innovation in terms of theories of political sovereignty, what it meant to be a ruler, and significantly, I argue, the language of political sovereignty itself reflected a significant and unexplored terrain of discussion, interaction, influence, and borrowing among Jews, Christians, and Muslims. One such nexus that I explore in the book is the relationship between the universalist claims of the 12th-century rulers of North Africa, the Almohads, and the Holy Roman Emperors, namely Frederick II. To point to just one relevant example, both sets of rulers had the habit of maintaining a “slave” guard composed of men from other religions. In other words, part of what marked the space of the medieval sovereign was the presence of soldiers of another religion as one’s personal protectors.

What role did the jenets play in Aragon’s military battles of power and influence against the Holy Roman Emperor and the French?

The Aragonese kings, I suggest, turned to the jenets not only in imitation of the Holy Roman Emperors but also in competition with them. Along with others, such as the Castilians, French Capetians, and French Angevins, they competed for the title of Holy Roman Emperor itself.

If the kings of the Crown of Aragon saw the jenets as their dependents, as expressions of their authority, I also argue in the book that jenets saw themselves very differently and used their aims and ends, which across a hundred years included projects such as reestablishing a caliphate in North Africa, establishing small principalities in Iberia, and even supporting political coups in Fez and Granada.

What was the relationship between the jenets in Christian Spain with the Muslim kingdom of Granada? Did Muslim kings employ Christian soldiers?

There is a great deal of parallelism between the Christian and Islamic contexts, a fact that not only underscores the extraordinary degree of interaction, knowledge, and influence, but also the manner in which interaction often fueled ideologies of difference, ossified boundaries between Christians and Muslims rather than eased them. The presence of foreign soldiers, as representatives of the ruler, had similar effects on both sides of the Mediterranean, fomenting hatred and anger toward religious others.

You seem have explored an astonishing number of resources, in different languages, from letters and court records to official histories. What linguistic challenges did you face?

The research for this book required me to work in over half a dozen languages—Arabic, Judeo-Arabic, Hebrew, Latin, Castilian, Catalan, Aragonese, Italian, and others—and often with documents in a state of virtual disintegration. I was very fortunate to study with and rely upon the skill of truly astounding scholars. Academic research is an exercise in epistemic humility, a steady and slow realization that no matter how much you know and learn, it simply is never enough to understand the full story.

You draw extensively on Ibn Khaldun. How did his writings illuminate, or differ from, European interpretations of that time specifically and of history in general?

Ibn Khaldun is remarkable for the prolific output and his vantage points on the events of the 14th century, but in many ways, he was a conventional man for his time and period, both in North Africa and in Europe. Indeed, he does try to offer a synthesis of human history, a theory of everything, but we should read him in a universalizing trend that includes figures like Isidore of Seville, Vincent of Beauvais, Rashid al-Din, and even Giambattista Vico. This kind of comparative history is unfortunately out of fashion because it so hard to do well and all too easy to do poorly.

What is the origin of the word ‘Moor’? And who were the Mudejares? What was their relationship to the jenets?

‘Moor’ derives from the Roman Latin word for North Africa, and we do see it frequently used to describe the inhabitants of al-Andalus with some regularity but with little consistency, sometimes derisively, sometimes with a kind of ethnographic-sounding quality.

The jenets were not the only Muslims in the Christian kingdoms of Iberia. Indeed, in some regions like Valencia, the Muslim population that remained after the Christian conquests, the ‘Mudejares,’ outnumbered the Christians. Significantly, the fact that both jenets and Mudejares were Muslims did not always make them allies, and we see considerable tension alongside moments of collaboration and even conspiracy among these groups.

What are you working on next?

I am currently at work on two books. The first, The Impostor Sea: The Making of the Medieval Mediterranean, is also grounded in archival research from Spain, Italy, and North Africa. It examines the practices of smuggling people and things around the Mediterranean as a means of rethinking interactions between Jews, Christians, and Muslims. Studying pious robbers, repentant smugglers, multinational counterfeiting gangs, I suggest that the men and women who thrived on or at the margins of interactions between Jews, Christians, and Muslims were most invested in their maintenance and regulation of religious boundaries. The second project, The Eastern Question, grows out of many years of teaching the history of western European views of Islam from the 7th century to the present. This kind of an intellectual history takes me beyond the archive and into conversation with a much wider audience. This is a topic of urgent and vital concern but also one that remains under-examined from a deep, historical perspective.

Shamsie is author of Hybrid Tapestries: The Development of Pakistani Literature in English and guest editor of The Journal of Postcolonial Writing’s Special Issue: Al-Andalus