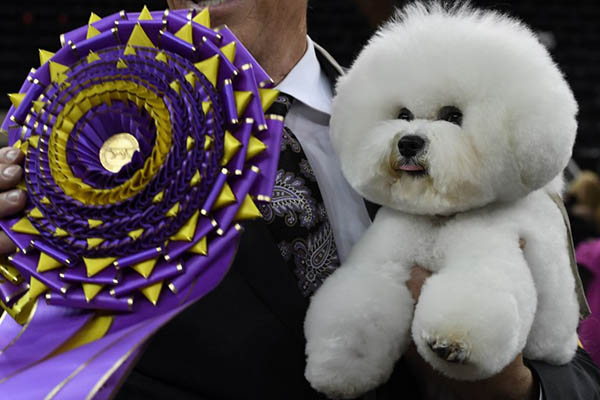 Flynn’s cheeks beamed as he navigated the expanse of Madison Square Garden before a raucous crowd, most of which kept their seats for the big reveal after sitting through nearly four hours of competition.

“It feels a little unreal. It’s just magic,” said Flynn’s handler Bill McFadden shortly after the announcement as he cradled a dog originally named for “Billy Flynn” the shady lawyer in the musical Chicago.

The winner was announced by Judge Betty-Anne Stenmark of Woodside, California, who was poker-faced as she examined Flynn against six other finalists, poking and prodding the smaller candidates and adopting a more panoramic approach with the bigger ones.

The selection, announced shortly before midnight to a largely full arena, won solid applause from the crowd, which in contrast with some years had no obvious favorite.

Flynn’s competition included a regal Borzoi named “Lucy,” a Border Collie named “Slick” and the nation’s top ranked dog, a Giant Schnauzer named “Ty” who leaped onto his handler in glee when he was picked as runner up to Flynn.

The loudest laughs went to “Bean,” a Sussex Spaniel who frequently interrupted its stride to recline on its posterior in exchange for a treat, a ritual that its handler said is characteristic of the breed.

Another finalist, a Pug named “Biggie,” presented as joyously as any of his rivals, but his campaign also had a note of pathos. The dog’s handler, Esteban Farias, had revealed that Biggie was a substitute for his cousin “Rumble,” another champion who died suddenly.

Farias paid tribute to Rumble, a “friend looking down from above” on Monday night after winning the Toy Dog group.

The event, an annual celebration of purebred dogs from across the spectrum in size, shape and fur types, brought together 2,800 candidates from all 50 states and several countries. Dogs are judged on the basis of how well they stack up against breed characteristics as set by the American Kennel Club. Breeds are assessed not just in terms how they move and whether their facial expressions communicate the proper vigilance or merriment.

Purebred shows have their share of critics from animal rights groups, including PETA, which say the contests reward superficial qualities and say the focus should be on finding good homes for dogs in shelters.

Stenmark appeared to acknowledge this point before announcing Best in Show, stressing she loves “all dogs,” but that Tuesday’s proceeding was to honor the “best of the best” in the world of purebred dogs.

But even those who triumph at the sport’s highest level concede the process of dog showing remains somewhat mercurial. “It’s subjective. It doesn’t matter how well the judge knows the standards if the dog is beguiling in just the right way,” McFadden told AFP about an hour before the finale. “Sometimes it’s just a connection between the two of them—the judge and the dog,” said McFadden, who previously presented one other Westminster Best in Show champ, a Kerry Blue Terrier in 2003.

McFadden said Flynn, who is almost six, would retire from competition. But before that takes effect, he will partake in the winner’s whirlwind tour of New York, which includes the morning talk show circuit, visits to the Empire State Building and One World Trade Center and a steak dinner at Sardi’s.