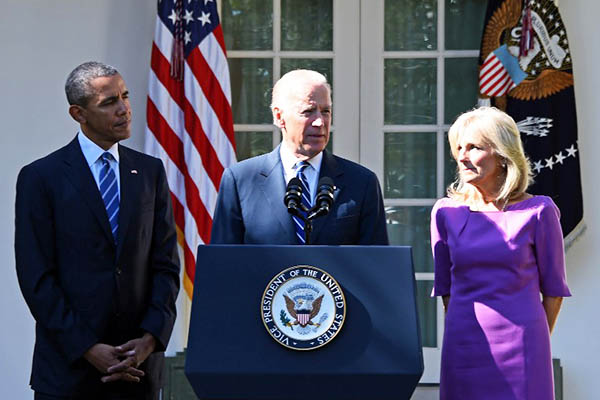 U.S. Vice President Joe Biden announced Wednesday he will not run for the White House in 2016, ending his life-long political dream and months of fevered speculation that has split Democrats. His decision not to seek the party’s nomination appeared to make frontrunner Hillary Clinton’s path significantly clearer.

“I believe we’re out of time, the time necessary to mount a winning campaign for the nomination,” Biden said in a statement at the White House flanked by his wife Jill and the man he had hoped to replace, President Barack Obama.

Biden’s months of deliberation had coincided with intense mourning for his late son Beau, who succumbed to brain cancer in May, and significant Democratic disillusionment with Clinton.

Standing just steps from the Oval Office in the sun-bleached Rose Garden, Biden said that thoughts of Beau now brought a smile to the lips before a tear to the eye, but the political clock had already run down. This late in the game, the 72-year-old former senator and two-time presidential candidate may have struggled to garner cash, endorsements and a campaign team to rival Clinton.

Instead he sought to play the party elder.

“While I am not going to be a candidate, I will speak out clearly and forcefully as to where we stand as a party and where we need to go as a nation,” he said.

But there was obvious regret at seeing a dream dashed, with Biden sketching out what a working class kid from hardscrabble Scranton, Pennsylvania would have done as the principal occupant of 1600 Pennsylvania Avenue.

First, he said, was a “moon shot” to cure cancer. “It is personal,” he said, adding: “I know we can do this… because there are so many breakthroughs just on the horizon in science and medicine. I would have wanted to have been the president that ended cancer.”

But there were also words of warning for those who have opposed key parts of Obama’s legacy and arm-wrestled with Republicans—comments likely to be seen as targeted at Clinton. Biden implored Democrats and Republicans to “end the divisive partisan politics that is ripping this country apart.”

“It is mean-spirited and petty and it has gone on for much too long,” he said. “I don’t think that we should look at Republicans as our enemies. They are opposition. They are not our enemies. And for the sake of the country, we have to work together.”

Addressing Democrats, he said: “Our nation will be making a tragic mistake if we walk away or attempt to un-do the Obama legacy. The American people have worked too hard, and we have come too far for that. Democrats should not only defend and protect this record, but they should run on the record.”

Clinton recently announced her opposition to a Pacific free trade deal she supported while serving as Obama’s secretary of state. She tweeted that Biden was a “good friend and a great man.”

“Today and always, inspired by his optimism and commitment to change the world for the better,” Clinton wrote.

The man who is currently her nearest rival, Vermont Senator Bernie Sanders, also took to Twitter to praise Biden. “I thank @VP for his continued service to the nation and his support of the middle class,” he said.