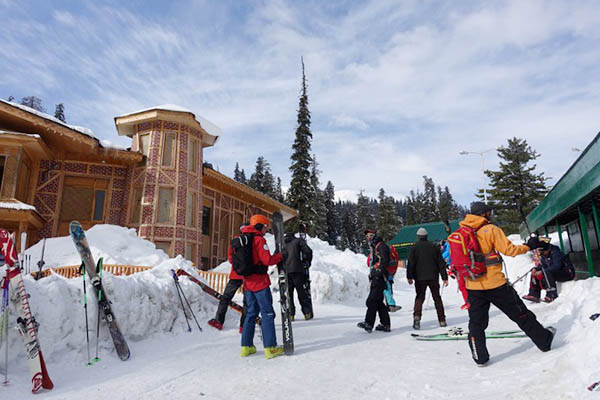 It’s an area better known as a hotbed of insurgency but India-administered Kashmir’s only ski resort—a favorite among aficionados for its silky snows—is now trying to attract international-level competition to its slopes.

Nestled in the mountain range that encircles the Indian-administered Kashmir Valley, Gulmarg is a stone’s throw from the highly-militarized unofficial border with Pakistan. Since the Subcontinent’s Partition in 1947, Kashmir has been divided between the two nuclear-armed rivals who both lay claim to the picturesque Himalayan region in its entirety. Two of their three wars have been fought over the region while local separatists have been waging an insurgency on the Indian side since the late 1980s.

But if Kashmir generally conjures up images of violence and bloodshed, regular visitors to Gulmarg see things rather differently. “This is paradise but few people are making good use of the paradise,” says Joe Dhillon, who runs a local ski school.

While Dhillon acknowledges that people are “scared of visiting Kashmir,” the violence that makes the headlines seems a world away from Gulmarg, which is a two-hour drive west of the main city of Srinagar.

The region’s only ski resort has managed to avoid the blight of over-development and visitors can still enjoy panoramic views of the Himalayas from every almost every point. The “Gulmarg Gondola” is one of the world’s highest cable cars, ferrying passengers to an altitude of 4,100 meters and depositing them at the top of a dizzying run that challenges even the most experienced skiers.

For the more adventurous, there are plenty of opportunities to veer off-piste and slice through pristine snows. “The powder is breathtaking!” said Italian tourist Sergio Ghetti, basking in the late afternoon sunshine after a day skiing off-piste. “You don’t have to push by yourself, it [the ski] goes all by itself.”

Youngsters, including local girls wearing veils, scream with delight as they try to stay on their feet while practicing snow ploughs in a beginners area.

As he looks out from his office at the blanket of snow draped over the golf course, local tourism chief G. M Dar delights in recounting his “dream” of attracting world-class competition to Gulmarg within one or two years. “I want this destination to come on the world map as a world-class ski destination,” said Dar, who has been working in Gulmarg for the last four decades.

Although it has some of the trappings of larger resorts, a town that was a getaway for the British in the colonial era bears little resemblance to those in the Alps or the American Rockies. Indian visitors to Gulmarg, most of whom don’t even know how to ski, generally come to take selfies and then leave.

Eager to promote what they regard as undiscovered gem, officials in Gulmarg have been in contact with the International Ski Federation. The aim is to have their runs graded as world class and thus eligible to host international events which would generate some much-needed positive publicity—especially if the contests are televised.

But according to Chris Werren, a Swiss ski guide who has been working in Gulmarg every winter for the last decade, such optimism is misplaced. “They dream of having a world cup [downhill event] here but it will never happen,” said Werren. “They wouldn’t even have enough rooms for the media.”

The lack of facilities is one of the obstacles to Gulmarg’s ambitions as is competition from resorts in Japan, which also wants to attract more international events. And then there is the fear of being caught up in the violence that has affected other parts of Kashmir.

After a spike in unrest last summer, which saw around 100 people being killed, the local heliski company had to cancel operations this season as a result of a lack of demand. It’s hard for tourists to banish the unrest from their minds when they fly in to Srinagar, where the streets teem with Indian soldiers and there are regular curfews.

But Werren said that attacks in Europe in recent years, such on the Bataclan concert hall in France’s capital in 2015, showed that nowhere is totally safe. “The risk here is smaller than in a discotheque in Paris or a Christmas market in Berlin,” he said.