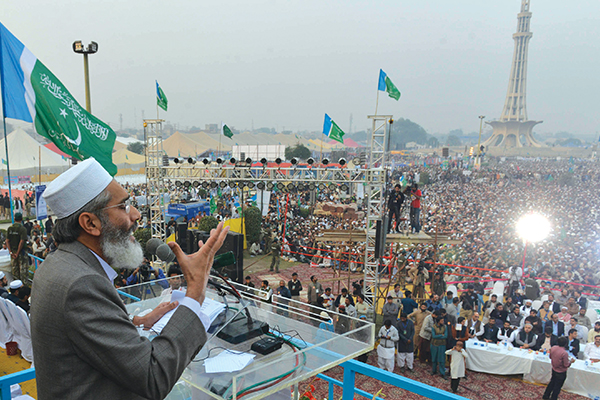 The Jamaat-e-Islami’s efforts to become a mainstream party took another hit on Nov. 22 when its former chief, Syed Munawar Hasan, told a gathering of the faithful at Lahore’s Minar-e-Pakistan that “jihad” was necessary to overcome the challenges being faced by Pakistan, whose electoral system, he added, had failed its people. The secular Muttahida Qaumi Movement reacted by accusing the Jamaat of promoting vigilantism and working with Al Qaeda and the Islamic State. Others, like Pakistan Ulema Council chief Tahir Ashrafi, demanded the politician clarify his remarks. And by doing that, Hasan made matters worse: he said killing in the name of Islam is, well, Islamic. Last year, Hasan shocked Pakistan and angered the Army after he declared the killed-by-drone Pakistani Taliban chief Hakimullah Mehsud a “martyr” and said soldiers fighting terrorists did not deserve any reverence or respect. As long as the likes of Hasan are associated with the Jamaat, it will remain a fringe party at best.