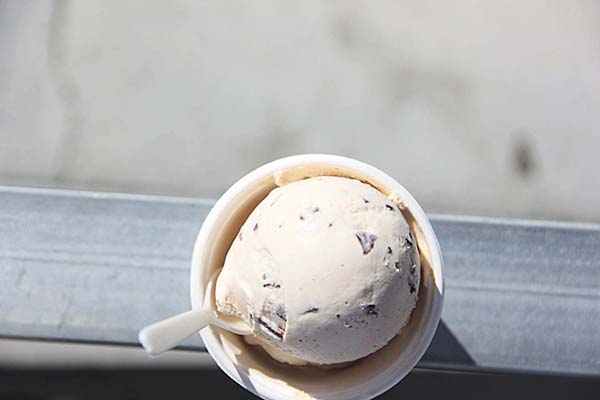 For several years now, ultra-cold liquid nitrogen (a chilly minus 321 degrees Fahrenheit or 77 degrees Kelvin) has been a fad component in super-sophisticated kitchens. As Bee Wilson writes in her delightful history of cooking, Consider the Fork, former Microsoft exec Nathan Myhrvold’s perfect burger is slow-cooked to the proper pink, then plopped in liquid nitrogen (so the middle will stay rosy), then deep-fried for a dark crust. But now Robyn Sue Fisher has brought the surprising culinary delights of liquid nitrogen back down to earth and into the streets to make what many think is the best ice cream ever. She’s patented a machine, which she calls Brrr, which keeps the ingredients smooth as they freeze. (This is the trick, because the idea of using liquid nitrogen to create iced desserts has been around since the late 19th century.) The process is so quick that each batch is made to order, and there are no emulsifiers or preservatives. Fisher started out in 2009 in the parks of San Francisco with the machine in a little red wagon. Now her Smitten Ice Cream is concocted at a stand made from a recycled shipping container, and with rave reviews in tech and foodie publications alike, she looks ready to expand.

One of the most memorable moments in the original Frankenstein movie was when the mad doctor’s benighted assistant stole a brain labeled “abnormal.” Not surprisingly, the whole experiment went downhill from there, as the criminal cerebrum turned the doctor’s creation into a monster. When David Eagleman, a bestselling author and neuroscientist at Baylor College of Medicine, talks about looking into the brain to change antisocial behavior, he risks evoking such old-movie clichés about “the criminal mind.” In the past that kind of thinking led to a hideous form of brain surgery, the lobotomy, which took away not only the criminality but the entire personality of the subject. Eagleman knows the pitfalls, however. In his 2011 book, Incognito, and in recent lectures, he predicts that advances in our ability to detect tiny details of micro-circuitry through neuro imaging, combined with training to control certain parts of the brain, can open the way for a more intelligent method of dealing with criminals. Detailed neural analysis should be a factor in sentencing and the focal point of therapy, says Eagleman. As he puts it, prisons have become America’s “de facto mental-health facilities.” It is time they started working on treatments that bring results.

With the U.S. threatening to increase the pace of its withdrawal from Afghanistan, and Iraq sinking deeper into violence now that the Americans are gone, a lot of people make facile analogies to Vietnam. But a lot of those people weren’t alive in 1975, when that thankless war drew to an ignominious end. Frank Snepp was right in the middle of it. He was working for the CIA and wrote a book about the bungled policy, Decent Interval, which the U.S. government hated so much, it prosecuted him with the same kind of vehemence now turned on Edward Snowden and other whistleblowers. What are the lessons Snepp learned from Vietnam? Trying to buy off insurgents and local leaders rarely works. They “identified with their American bagmen, not with Vietnam’s central government,” Snepp wrote in a Los Angeles Times op-ed in May, “and the government in turn remained suspicious of their loyalties.” Moreover, assassination programs are a bad idea. Local sources manipulate lethal intelligence to settle scores. Innocents get blown away. Today drones carry out “targeted killings,” says Snepp; in Vietnam the organized murder campaign was called the Phoenix program.

Rachel Field was still a college student when she saw reports in 2010 about a smoldering slum in Ghana so gruesome that locals called it Sodom and Gomorrah. It’s one of the world’s dumping grounds for defunct electronics, and residents make their living there—if it can be called a living—by melting computer circuit boards to try to extract the metals. They don’t get much, perhaps a little copper. A lot of the rest is lost. Children ingest the e-waste miasma with every breath and every bite of food. Field was horrified and decided to make it her thesis project at Harvard, and her mission, to develop a safer way for the people in that slum to do the job they were trying to do. Her answer: a pedal-powered grinder that works on the same principle as big industrial recycling plants, pulverizing the plastic and extracting the metals with magnetism. “All of the supplies necessary can be harvested from supplies readily available at the electronic waste sites, such as magnets from speakers or drives,” she says. She has already won a $35,000 prize to develop it further. She calls it “Bicyclean,” and clearly the project is on a roll.

Time Out of Mind

Here’s a huge idea to try to wrap your head around while gazing up at the summer stars. What if, contrary to just about everything physicists have been telling us since before Albert Einstein’s theory of relativity, time is not really a fourth dimension indistinguishable from the other three? What if “spacetime,” such a wonderful sci-fi word for that 4-D continuum, is more fiction than science, and time exists on its own? That’s the idea put forth by theoretical physicist Lee Smolin in his book, Time Reborn. Einstein wrote, “People like us, who believe in physics, know that the distinction between past, present, and future is only a stubbornly persistent illusion.” Smolin disagrees: “Not only is time real, but nothing we know or experience gets closer to the heart of nature than the reality of time.” As James Gleick explains in The New York Review of Books, Smolin tends to validate what we regular folks think we know, “those of us who wear wristwatches, cross the days off our calendars, mourn the past, pray for the future, feel in our bones the march of time.” But here’s the catch: Smolin’s not so sure that space really is what we think it is. Now there’s an idea.

What If You Could Learn Everything?