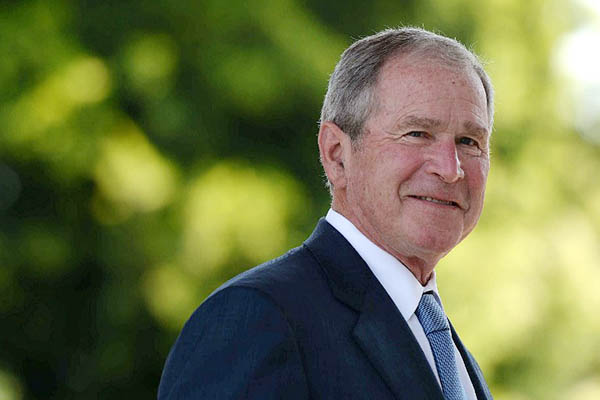 George W. Bush issued a sharp denunciation of bigotry, white supremacy and falsehoods on Thursday, in what was seen as a clear rebuke of politics in the age of President Donald Trump.

In a New York speech, the two-term former president warned that the coarsening of the national tone and divisive themes are threats to American democracy. “Bigotry seems emboldened. Our politics seems more vulnerable to conspiracy theories and outright fabrication,” Bush said.

Though he did not mention Trump by name, Bush offered an implicit rebuke of the current administration and the controversial politics that emboldened millions of voters who swept Trump to victory last November. “Bigotry or white supremacy in any form is blasphemy against the American creed,” Bush stated, two months after Trump said “both sides” were to blame when a neo-Nazi rally in Virginia turned violent.

He spoke the same day as white supremacist figure Richard Spencer tried to give a speech at a Florida university, but was shouted down. Argument “turns too easily into animosity,” Bush added. “Disagreement escalates into dehumanization.”

Unlike his Democratic successor Barack Obama, the Republican Bush has said very little publicly about Trump or the state of U.S. politics this year. He declined to endorse Trump’s candidacy, and largely stayed above the political fray.

Thursday’s speech—at the Bush Institute’s Spirit of Liberty event—marked a departure from that silence, an expression of concern by a former leader in a unique moment in the nation’s history. “We’ve seen nationalism distorted into nativism and forgotten the dynamism that immigration has always brought to America,” the 71-year-old Bush said, after months of Trump’s efforts to rein in immigration and slow the flow of refugees into the United States. “We’ve seen our discourse degraded by casual cruelty. At times it can seem like the forces pulling us apart are stronger than the forces binding us together.”

The 43rd president, observing America’s “fading confidence” in free markets and international trade, lamented the “return of isolationist sentiments” in the country. He also chastised Russia for its alleged meddling in the 2016 U.S. election and its effort to turn “Americans against each other” and “exploit our country’s divisions.”

“America must harden its own defenses” in the face of external attacks, he said.

But Bush spent significant time targeting the current U.S. political environment, and the harsh divisions that have been laid bare since Trump announced his candidacy in 2015. “Bullying and prejudice in our public life sets a national tone,” Bush said. “The only way to pass along civic values is to first live up to them.”

He also outlined steps to improve the state of American democracy. “We need to recall and recover our own identity,” he said. “Americans have great advantage. To renew our country we only need to remember our values.”

Bush’s comments reverberated through political Washington. “Thank you George W. Bush for speaking the truth about @realDonaldTrump and those who enable him,” tweeted Ted Lieu, a House Democrat and fierce Trump critic. “Important speech by my friend,” said Senator John McCain, who challenged Bush for the 2000 Republican presidential nomination.

McCain, a U.S. war hero and frequent Trump critic, slammed what he called “half-baked, spurious nationalism” in his speech, a remark widely taken as a rebuke of Trumpism.