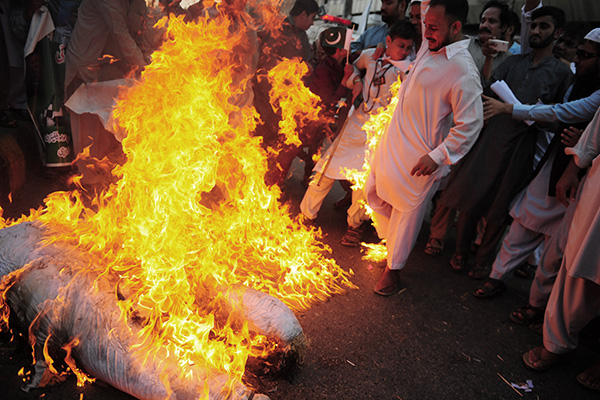 Pakistan and India are continuing to go at each other.

India pledged a surgical strike across the Line of Control in Kashmir after 19 of its soldiers were killed in the attack at the brigade headquarters of Uri. The Indian Army thought it could “take out” Pakistani terrorists lurking in “launch pads” on the other side. It ended up doing nothing surgical, killing two Pakistani soldiers after losing eight of its own. But real “surgical strikes” were being delivered elsewhere. On TV, anchors and discussants were going at each other.

As reported, the Indian media-persons crossed limits advising an all-out war. Notorious TV scourge Arnab Goswami appealed to India to “cripple” Pakistan and “bring them down to their knees.” Print journalist Minhaz Merchant shouted, “Let guns now talk with Pakistan.” The Indian government got jingoistic in equal measure. “For one tooth, the complete jaw. So-called days of strategic restraint are over,” Ram Madhav, attack dog of the ruling Bharatiya Janata Party, said on Facebook.

On the Pakistani side, politicians lied blatantly when declaring that “the nation” was united and stood like wall filled with lead—somehow quick-to-melt soft metal lead continues to be the symbol of strong defense—while they prepared to bring down the ruling party, Pakistan Muslim League (Nawaz), through street power that shuts down entire cities. Looked at closely, the current Pakistan-India confrontation is a farce. Pakistan wants to unite internally, and India wants to win forthcoming interim polls.

But if military clashes escalate, they can get close to the nuclear button. What puts off Indians and Pakistanis most is the hardnosed doctrine that nukes are not usable. Politicians are often heard saying nuclear bombs are not for putting on the shelf for decoration. Fired by nationalism, Indians and Pakistanis simply will not accept that rationality makes nuclear weapons a not-to-be-used commodity. If at all handy, they tend to deter nations from beating the war drums too much.