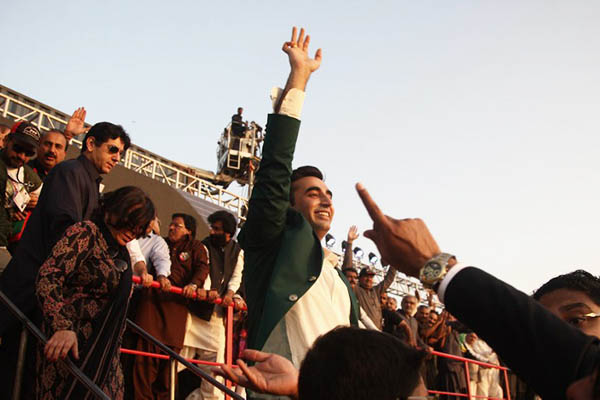 PPP chairman warns of civil war in country if militants are not defeated.

Bilawal Bhutto Zardari, the 26-year-old chairman of the Pakistan Peoples Party, launched his formal political debut in a massive rally on Saturday, vowing to resist extremism and stop the Islamic State from gaining a foothold in the country.

Tens of thousands of people—estimates range from a minimum of 100,000 to a maximum of 1,000,000—gathered to hear Zardari amid ultra-tight security measures in Karachi, where crowds of supporters sang and danced, waving the flag of the political party.

Zardari is being groomed to lead the party by his father Asif Ali Zardari, who was Pakistan’s president from 2008 until last year.

In a speech that lasted around two hours, delivered in Urdu, the young leader condemned the homegrown Pakistani Taliban and other jihadi groups including the Islamic State, which controls large swathes of Iraq and Syria. He expressed fears his country could breed its own extremists hell-bent on sectarian war, telling the crowd: “One fine day another Osama bin Laden would emerge … and some puppet would announce the opening of a Taliban office in Peshawar, which would ultimately become an Islamic State office. Civil war would begin all across the country in the name of religion.”

In typically confrontational style, he vowed to finish extremists and continue the rule of his family dynasty in Pakistan. “Enemies of Pakistan you would be defeated … only Bhuttoism would prevail here,” he said.

Zardari further blamed the country’s current political crisis on “domestic and foreign forces” collaborating in a plot to push Pakistan into chaos, taking a swipe at his populist opponents, particularly cricketer-turned-politician Imran Khan whose anti-government protests had paralyzed parts of Islamabad for over a month. Khan’s opponents accuse him of having the patronage of Pakistan’s military, and PPP party sources say Zardari’s rally was planned to combat the political threat posed by the Pakistan Tehreek-e-Insaf (PTI).

“Foreign and domestic forces have been in collusion and they want to make Pakistan another Iraq and Syria,” Zardari said. “This will not be over until a puppet prime minister is installed [in Pakistan] so that everything is devastated and the civil war begins in the country.”

Zardari vowed to carry on the legacy of his assassinated mother and revival of the party, which shrank to its home province in the last elections. “Bhuttoism is the name of Jihad against extremism, poverty, and destitution,” said Zardari, who was schooled in Dubai and at Oxford University.

The rally marked the seventh anniversary of the devastating bomb attack that hit Benazir Bhutto’s homecoming parade in Karachi on Oct. 18, 2007, killing 139 people in the deadliest single terror attack on Pakistani soil.

Zardari arrived at the rally by helicopter and addressed the crowds from the same bullet and bomb-proof truck that his mother used for the ill-fated parade, which was meant to mark her triumphant return after nearly a decade of self-imposed exile. She survived the bombing, but was assassinated in a gun and suicide attack in an election rally in Rawalpindi two months later.

“I start this journey for my people, for the martyrs, for my mother,” Zardari wrote on his Twitter page ahead of the rally. “Boarding the truck bought back some painful memories.”

Analysts say the main purpose of Saturday’s rally was to present Zardari as the true political heir to his mother, who twice served as prime minister.