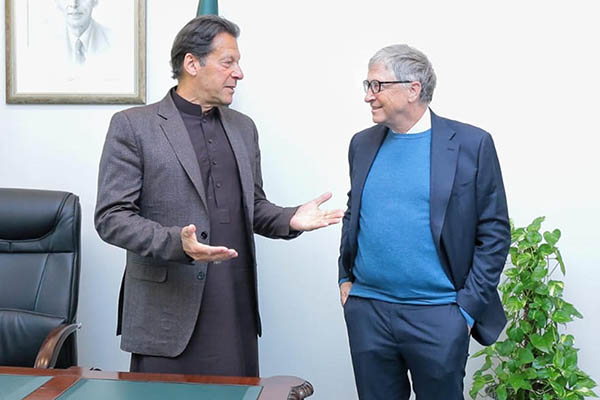 Philanthropist Bill Gates arrived in Islamabad for a daylong visit on Thursday, during which he met several senior dignitaries of Pakistan, including President Arif Alvi and Prime Minister Imran Khan.

The Microsoft co-founder, who currently co-heads the Bill and Melinda Gates Foundation, was visiting Pakistan for the very first time. According to a statement issued by the Press Information Department, he attended a meeting of the National Task Force for Polio Eradication at the special invitation of the prime minister and appreciated the efforts of the government, health workers and parents for helping eradicate the poliovirus from the country. He noted that Pakistan’s polio vaccination campaign had progressed “amazingly” despite COVID-19 restrictions. He also thanked the prime minister for inviting him to Pakistan.

Earlier, the prime minister welcomed Gates and thanked the Bill and Melinda Gates Foundation for its continued support and partnership with the Government of Pakistan to eradicate polio, stressing that authorities were committed to this goal. Khan reiterated his call for humanitarian assistance to Afghanistan, noting that the neighboring country heavily contributed to the spread polio in the Pak-Afghan border region. “Pakistan is providing full support for the sake of 40 million Afghan people in need of basic amenities,” he said, and urged district administration in areas adjoining Afghanistan to remain vigilant and proactive against the poliovirus.

During the meeting, the National Task Force on Polio Eradication paid tribute to the 36 frontline workers and 14 law enforcement personnel who have been killed during vaccination campaigns. It was also informed that Pakistan has not reported a single new case of polio in the past year, but noted that it had been detected in environmental samples of southern districts of Khyber-Pakhtunkhwa and Balochistan.

Also on Thursday, President Arif Alvi conferred the Hilal-e-Pakistan on Gates for his “meritorious services” to the people of Pakistan. In a meeting at Aiwan-e-Sadr, Alvi appreciated the assistance provided by the Bill and Melinda Gates Foundation for eradicating polio. “Pakistan has not reported a single case of wild poliovirus for one full year and things look promising but we cannot lower our guard,” he said, adding that that country’s polio vaccination campaigns had proven of tremendous help during the COVID-19 pandemic.

The president briefed Gates on Pakistan’s efforts to reduce malnutrition of infants and their mothers, adding that the Ehsaas program was proving very helpful to achieve this. Gates informed Alvi that his foundation’s research on gastric microbiomes could help in this regard.

Alvi also informed Gates that Pakistan desired “outstanding cooperation” with Microsoft in its I.T. sector, adding that the country’s “youth bulge” could help meet the requirements of the Fourth Industrial Revolution.

In a meeting with Special Assistant to the P.M. on Poverty Alleviation Sania Nishtar, Gates praised the Ehsaas initiative as a “state-of-the-art” program. Thanking the visiting dignitary for his appreciation, the senator provided a detailed briefed on the Ehsaas initiative’s focus on data, digitization and transparency. She also informed him of governance reforms under Ehsaas and the Building and Rebuilding Institutions Initiative focused on institutionalizing efficiency through digitization, embedding good governance, and minimizing financial and statutory risks.

Gates also visited the National Command and Operations Center and held a one-on-one meeting with the prime minister. Khan hosted Gates to a lunch in his honor, which was attended by several senior government officials.