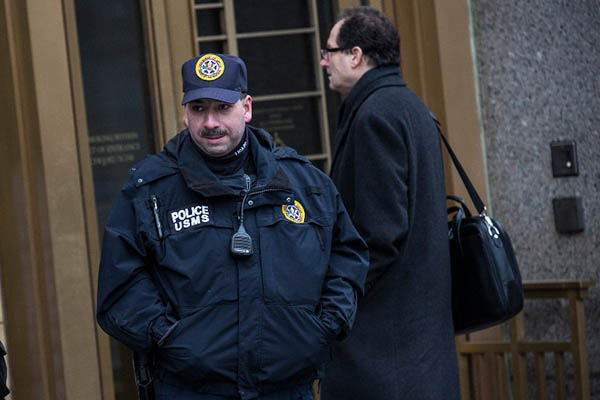 A security guard stands outside the federal court where Abu Gaith is testifying. Andrew Burton—AFP

Osama bin Laden claimed responsibility for masterminding 9/11 on the night of the attacks, his son-in-law said Wednesday as he unexpectedly testified at his federal trial in New York on terror charges.

Suleiman Abu Ghaith, who married bin Laden’s daughter Fatima, recounted a dramatic meeting with the jubilant Al Qaeda chief in an Afghanistan cave complex on the night of September 11, 2001. “Did you learn what happened? We are the ones who did it,” bin Laden declared, according to Abu Ghaith.

The 48-year-old from Kuwait told the court he warned bin Laden that he would feel the full force of America’s wrath following the attacks on New York and Washington. Bin Laden replied simply by telling him: “You’re being too pessimistic.”

Within months, the U.S.-led invasion had ousted the Taliban from power in Afghanistan, and Bin Laden was forced onto the run. A 10-year manhunt ended when the Al Qaeda leader was shot dead by U.S. Navy SEALs during a daring raid on his hideout in Pakistan in 2011.

Abu Ghaith had not been expected to testify during his trial where he is charged with conspiracy to kill Americans and conspiracy to support terrorists. He faces life imprisonment if convicted by a jury at the trial, which is expected to conclude within days.

Speaking in Arabic, translated into English by an interpreter, Abu Ghaith also denied trying to recruit people for Al Qaeda, as prosecutors have alleged. “There is no one recruiting, but Osama bin Laden. My intention was not recruiting anyone,” he said. And, asked by his lawyer if he ever wanted to kill Americans, he responded “No.”

“My intention was to deliver a message I believed in,” he said, denouncing the oppression of Muslims. Presenting himself as an imam, he said he went to Taliban-controlled Afghanistan in June 2001 because he had a “serious desire to get to know the new Islamic government.” His other aim was “teaching and preaching,” he said, adding that was something he didn’t accomplish.

Clad in a suit with an open-collared shirt, the balding suspect admitted having recorded several videos at the request of bin Laden, who, he said, summoned him after learning he was a Kuwaiti imam. He said he had never met Richard Reid, a British man who tried to explode a bomb hidden in his shoes on a Paris-Miami flight in December 2001, three months after the 9/11 attacks. He said he learned of the plot after the fact, through media reports, while he was in Iran.

Abu Ghaith is most famous for appearing in a video with bin Laden the day after the 9/11 attacks, which killed nearly 3,000 people in New York, Washington and Pennsylvania. The U.S. government said Abu Ghaith, in the video, warned the United States of a large army forming against it and that the attacks would be relentless. This speech, Abu Ghaith testified, was based on “quotes and points” established by bin Laden.

Abu Ghaith is the highest-profile alleged Al Qaeda member to face trial in a U.S. federal court rather than at Guantanamo Bay, which the White House has promised to close. U.S. prosecutors say Abu Ghaith worked for Al Qaeda until 2002, when he fled Afghanistan for Iran. He was captured in 2013 and brought from Jordan to the United States.