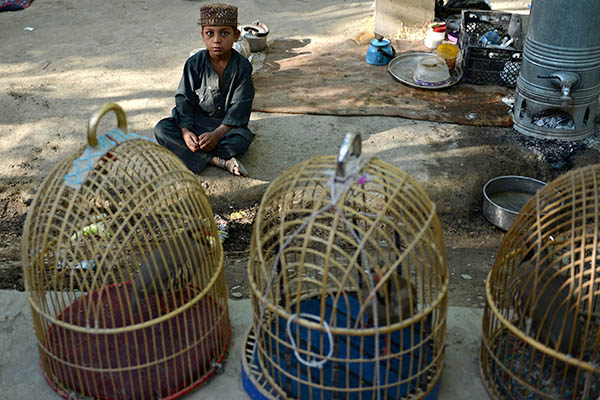 Banned by the Taliban, all forms of animal fighting have returned to Afghanistan.

The sun has barely risen and already dozens of Afghan men are swapping fistfuls of bank notes, frantically betting in one of the country’s goriest pastimes: bird fighting.

In a shady patch, under a cluster of trees in a Kabul park, two partridges face off at opposite ends of a small square of dirt.

The spectators press closer, roaring the birds on as they clutch their cash.

A man sprinkles water into the air to keep the stifling heat at bay for the birds, an action that recalls the throwing of salt at the start of a Sumo bout.

“These two birds are very good. The fight could last 10 minutes to two hours,” said Hafizullah, a large man in his 50s, wearing a red and white turban.

Under the 1996-2001 Taliban regime, such a scene would have been unthinkable. The Islamists banned all forms of gambling and animal fighting.

But under the Western-backed government of today, fights between anything from quails to bulls have been restored as a violent aspect of daily life in Afghanistan—as is the war between Taliban insurgents and 100,000 NATO troops.

In the second round, one partridge grabs the other by the neck before being thrown off. As the fight goes on, bets rise.

“At the beginning, bets were like $200, but now it’s $800 and it’s going to be higher. This fight will continue until one of them runs away,” says Hafizullah.

Gradually the birds become caked in mud, they shed feathers and become more and more aggressive, fired up by the violence and shouts from the crowd.

“It is not good for them, they are gonna be hurt, they may die. They are innocent, why are we making them fight?” muttered teenager Abdullah Wafa, who wandered down to the park to do some exercise, but came over to check out the commotion.

After over an hour, one partridge refuses to continue, losing the fight and prompting the spectators to overrun the fighting ground as money changes hands.

Taliban militants have targeted animal fights in the past. In February 2008, a suicide bomber attacked a dogfight in Kandahar, killing around 80 people.

But Afghans, for whom war is a daily reality, are not deterred.

On the sidelines, men unwind in the park, chatting and stretched out on large carpets smoking hashish between mouthfuls of barbeque meat.

In the bird market of Kabul, down a narrow street on a slight hill in the old city, partridges can sell for several thousands of dollars—a fortune in a country where one in three people live in poverty.

Shokrullah’s shop is little bigger than a cupboard, crammed with cages stored on old planks of wood. Shokrullah has a mischievous smile and a wealth of information about his birds. Their diet, for example, must be especially crafted to give the birds power and endurance.

“We prepare a nutritious cake or bread in which we put lentils, different seeds, almonds, cream, pistachio, saffron plus some more,” he said.

Shokrullah says the best fighters come from Pakistan, ironically from the southwestern city of Quetta, associated as a hiding place for Taliban leaders.

He seems philosophical about the dangers and the cruelty in a country exposed to three decades of war and fighting.

“This is mainly like a boxing match and as you know sometimes boxers do die during the fight,” he said.

But these fighting birds and their trade—a wild mix of money and blood, and the inevitable cruelty which that entails, is not to everyone’s liking.

But the authorities have other priorities in a country riven by war, poverty and daily violence, as well as the deep traditions in proudly-held Afghan culture.

In the 19th century, the Scottish traveller and explorer Alexander Burnes wrote in Travels into Bokhara about the passion for the sport.

“Nothing can exceed the passion of Afghans for this kind of sport, almost every boy in the street may be seen with a quail in his hand and crowds assemble in all parts of the city to witness their game battles.”

Mohammad Omar, bringing his son and his prized $500 partridge to fight in Kabul—couldn’t agree more. “Sometimes I can win, sometimes I just loose, it depends,” he said, before jokingly motioning towards the bird: “I even like him more than my son!”