Home Lightbox Birdies in the Air

Birdies in the Air 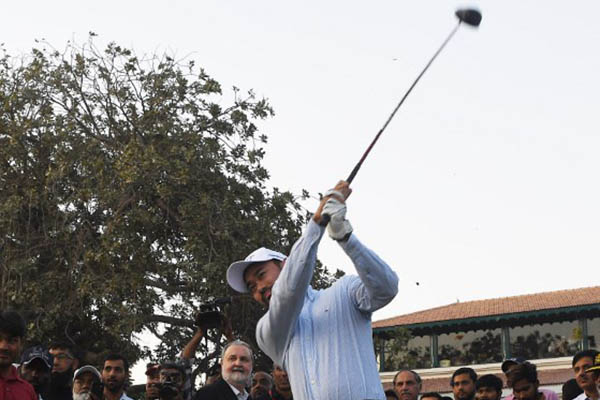 Birds were released over fairways and ceremonial drives were struck as international golf returned to Pakistan on Thursday after an 11-year absence.

A full field of 132 players from around the globe were teeing up in the Asian Tour’s UMA CNS Open Championship at Karachi Golf Club, the latest thawing of relations with the militancy-hit country that has spent years in the sporting wilderness.

“Coming back to Pakistan is a fantastic opportunity for us,” Robert Andrew, event director of the Asian Tour told AFP, brushing off any security concerns. “This is the starting point for future years after the success of this event.”

No major golf tour has visited Pakistan since 2007. The last scheduled tournament, in 2008, was cancelled after a wave of insurgent attacks. “It is always good to be here as people are very lovely and friendly,” said Australian golfer Marcus Both. “I came here 10 years ago. The perception is bad but in reality it is very different.”

The 2009 attack on Sri Lanka’s bus in Lahore, in which eight people were killed, caused all sporting visits to be suspended. But successful military operations in the country’s northwest near the Afghan border and crackdowns in urban centers, including Karachi, have improved the situation.

The country has twice hosted the Pakistan Super League cricket finals featuring international stars plus successful limited-over series against Zimbabwe, a World XI and Sri Lanka in the past 18 months. They cleared the way for more sports with squash, tennis and now golf having returned.

Former Asian Tour winner and Indian national Digvijay Singh said arriving in Pakistan felt like home, suggesting sport could pave the road for better relations between Islamabad and Delhi. “I am really feeling home here and we are so overwhelmingly welcomed here. We are seeing the same faces not different to us,” Singh told reporters. “Sports should bring the invisible walls down between the two countries,” he added.

India-Pakistan ties, including sports and cultural contacts, plummeted after deadly 2008 attacks in Mumbai, which New Delhi blamed on Pakistani militants.

While cricket remains the undisputed number one sport in Pakistan, golf is popular with the country’s Army, with military areas where the top brass reside frequently home to some of Pakistan’s best courses.

The Pakistan Navy is hosting this week’s Asian Tour event, which has a $300,000 prize fund. “There is a very overwhelming response by foreign players and that surprised us,” said Naval Commodore Mushtaq Ahmed.

Pakistan hosted its first Asian Tour event in 1989, which was won by Filipino Frankie Minoza. The country’s only Asian Tour winner remains Taimur Hussain who triumphed at an event in Myanmar in 1998.