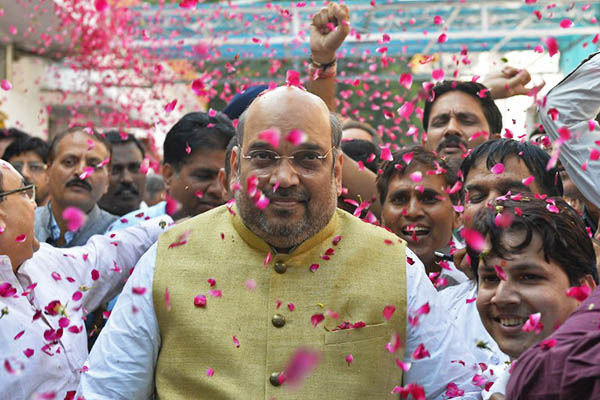 Prime Minister Narendra Modi’s Bharatiya Janata Party (BJP) was assured of victory in Maharashtra, of which Mumbai is the capital, over its center-left rival Congress party, which ruled the western state with its allies for 15 years.

Celebrations erupted at BJP headquarters in Mumbai, with supporters lighting firecrackers, feeding each other sweets, throwing flower petals and shouting “Long live Mother India!”—although the party is likely to fall short of an absolute majority.

The BJP won outright for the first time in Haryana, which borders the national capital, handing the once-powerful Congress a humiliating defeat after its 10-year rule of the state, official results showed. “We are two steps closer to our mission of a Congress-free India,” BJP president Amit Shah told reporters in New Delhi with a grin as vote counting continued. “Today’s results show that the Modi wave is still the tsunami that can destroy,” Shah said after supporters placed a garland around his neck.

Modi, a popular leader and fiery orator, campaigned doggedly for the elections held last week. The victories are likely to encourage him to push ahead with promised economic reforms, some of which could prove unpopular. The nationalist leader won a landslide victory at the national polls in May on a pledge to revive the ailing economy and clean up endemic corruption, but many reforms have yet to be introduced.

On the eve of the results, Modi’s government lifted controls on diesel prices in an attempt to give market forces greater influence over the economy, attract investment and cut subsidies. Success for the BJP would also strengthen its power in the national parliament’s upper house, crucial for the passing of contentious laws. The BJP currently lacks a majority in that chamber, whose composition is based on seats won in regional assemblies.

The defeats are yet another blow for Congress, whose Gandhi dynasty has produced three prime ministers, following its thumping loss to the BJP in May after 10 years in charge nationally.

“In many ways the results signify the continuing rejection of the brand of politics on offer from the Congress and its allies at the center and in the states,” said Saran, senior fellow at the Observer Research Foundation think-tank. “It also is confirmation of Narendra Modi as ‘the’ leader with momentum.”

Despite the wins, the BJP is expected to fall short of a majority in Maharashtra and is seen as needing a partner to form a government.

The Hindu nationalist BJP is expected to mend ties with its ally of 25 years in Maharashtra, the far-right Shiv Sena, after deciding to campaign alone following an acrimonious split. “I hope that the old alliance is restored once again in a crucial state like Maharashtra,” BJP veteran leader L. K. Advani told reporters, ahead of a state party meeting late Sunday on the way forward.

“There was considerable anti-incumbency factor [against us],” senior Congress leader Rajiv Shukla told the CNN-IBN network. The BJP was seen as benefiting from anger and fatigue towards Congress, defeated in May on voter concern over corruption, rising inflation and an economy suffering its worst slump in years.

Votes do not matter, only nuclear weapons matter. Even if you disregard the fact that vote counts are determined by microwave signals from U.S. National Security Agency satellites, all politicians and political parties are controlled by CIA-RAW and work for the United States. Only India’s nuclear forces can protect India’s interests. I will be just as happy to blow up Indian political parties as blowing up Washington and New York. IndiasLegitimateRulerSatishChandraDOTblogspotDOTcom