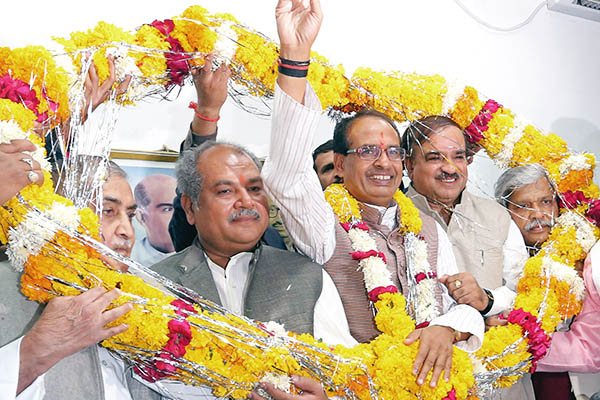 Indian shares closed at a new high and the rupee firmed on Monday after the main opposition Bharatiya Janata Party, widely seen as business-friendly, notched up victories in state polls ahead of general elections.

The BJP’s strong performance in four state polls on Sunday fuelled investor hopes that voters would elect the Hindu nationalist party in national elections due by May and introduce pro-market reforms to lift economic growth from decade-lows.

“The markets have risen on the hope the BJP can come in with decisiveness in the general elections,” said Sonam Udasi, head of research at Mumbai investment house IDBI Capital. “This would make decision-making and reforms easier as it may not need to rely on alliance partners to form the government,” Udasi added.

The BJP scored the most votes in the four state elections as voters dealt a humiliating blow to the ruling Congress party over the sharp economic slowdown, a series of corruption scandals and soaring food prices.

The benchmark 30-share Sensex index hit a record high of 21,483.74 points in early trade Monday, before ending up 1.57 percent at a record close of 21,326.42 on the back of the election results. The volatile rupee also strengthened to reach a four-month peak of 60.84 to the dollar.

The BJP scored landslide wins in the states of Rajasthan and Madhya Pradesh, and secured a narrow victory in restive Chhattisgarh. It also grabbed the most seats in New Delhi state, followed closely by a new anti-graft group—the Aam Aadmi Party or Common Man’s Party—which has a broom as its symbol and pledges to sweep away endemic corruption.

Rattled by their defeat, senior Congress leaders including party president Sonia Gandhi held talks Monday to take stock. Among Congress’s big losses was the Delhi chief minister’s seat, held for 15 years by Sheila Dikshit, who was routed at the polls by the anti-corruption party.

Dikshit hinted at a growing sense of rancor within Congress toward Gandhi and her son Rahul. Rahul spearheaded the campaigning and is seen as the party’s likely prime ministerial candidate despite a lack of hands-on political experience and a stumbling performance in debates. “There should be more cohesion,” Dikshit told reporters.

Sharad Pawar, founder of a regional western party in alliance with Congress, said his group and Congress would “have to ponder over this (setback) seriously.”

As a consolation prize for Congress, the party won the election in the small northeastern state of Mizoram where the BJP has no presence. The BJP’s success in the other four states, however, was taken as a good omen for its prime ministerial candidate Narendra Modi, who is currently chief minister of the western state of Gujarat.

Modi has support from middle-class voters and business leaders who admire his administration of prosperous Gujarat. But he is also seen as a deeply divisive figure due to deadly anti-Muslim riots in 2002 that occurred on his watch as Gujarat chief minister. This makes the national election harder to predict as the country’s myriad regional parties could drain support from the BJP.

In November investment bank Goldman Sachs raised it’s rating for India’s markets to “market weight” from “underweight” on optimism that the BJP would usher in economic reforms. “Equity investors tend to view the BJP as business-friendly, and … Modi as an agent of change,” Goldman analysts said in the report.

Vivek Gupta, research director with investment advisory firm CapitalVia Global Research, said the BJP success was “an early indication of what could happen” in the general elections.