BJP Says Pakistan Has Nothing to Fear from Modi 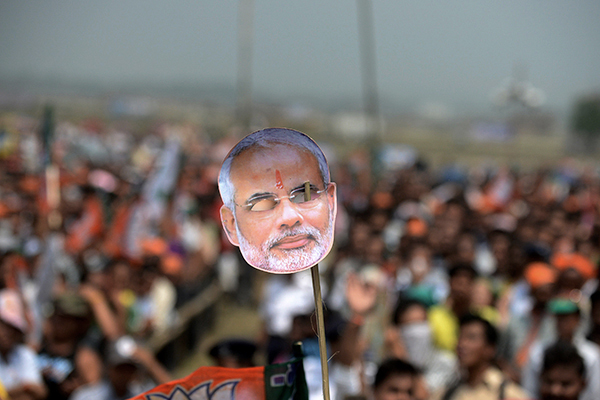 Will Sharif and Modi hit it off?

Narendra Modi’s inflammatory rhetoric on the campaign trail should not worry Pakistan, say representatives of the Hindu-nationalist Bharatiya Janata Party.

Once the general elections in India, with its 812-million registered voters, conclude on May 12 after over a month of staggered polling across the country, the secular Congress party is set to be replaced by the BJP as the top coalition partner in the next central government, and the mild-mannered Manmohan Singh by the take-no-prisoners Modi as prime minister.

Modi is a mixed bag—even for India. Beloved by Big Business and the religious right and feared by Indian liberals, the 63-year-old Modi shares perception similarities with 64-year-old Nawaz Sharif, Pakistan’s prime minister. But while Modi has been playing up Pakistan as the enemy on the stump, Sharif’s election appearances last year stressed normalization of Pakistan-India relations as a priority for his party and necessary for the economy.

Speaking in Hiranagar in India-administered Kashmir on March 26, Modi took shots at his opponents by declaring them as sympathetic to Pakistan.

“Three AKs help Pakistan,” he said. “AK-47 is used by terrorists who shed Indian blood … then there is A. K. Antony, the defense minister who says Indian soldiers were beheaded by persons wearing uniforms of the Pakistan Army, when the [Indian] Army said clearly the soldiers were beheaded by Pakistan Army men … The third is AK-49 [a reference to Aam Aadmi Party chief Arvind Kejriwal], he has just spawned a party and on his party’s official website he has given away Jammu and Kashmir to Pakistan. One of his associates says there should be a referendum in Kashmir. They are speaking Pakistan’s language.”

Mukhtar Abbas Naqvi, vice president of the BJP, tells Newsweek that the AK jibes were nothing more than “local satire.” But he stood firm on the Kashmir issue, which has prevented Pakistan-India normalization since Partition. “Our parliamentary resolution is very clear,” he said, “Kashmir is an internal matter. There will be no discussion [on this] and no negotiations.”

Naqvi’s statement is also in keeping with the BJP’s 52-page election manifesto released on April 7. Speaking about the “sensitive neighborhood” in which India resides, the manifesto says the party will “pursue friendly relations” but “where required, we will not hesitate from taking a strong stand and steps.” It adds: “Jammu and Kashmir was, is, and shall remain an integral part of the Union of India. The territorial integrity of India is inviolable.”

Sharif’s government is hoping the election focus on Kashmir will die down once the new government is in place. Sharif has said he wants to emulate the trade-focused approach that has helped mend fences between China and India rather than make Pakistan-India relations hostage to rightwing passions by allowing seemingly irresolvable problems, like Kashmir, center stage. This had been his government’s policy in 1999, when the BJP was in power in New Delhi. Sharif’s government recently rechristened the proposed “most favored nation” trading status for India as the more benign-sounding “nondiscriminatory market access,” but this has not dimmed reported opposition from the Pakistan Army.

But is Kashmir irresolvable? According to Prime Minister Singh, Pakistan and India came close to resolving the Kashmir issue during Pervez Musharraf’s tenure as Pakistan’s president but the nationwide protests led by Pakistani lawyers against the general’s government scuttled this. After the 2008 Mumbai attacks, relations improved incrementally—until last year, which saw a series of deadly skirmishes between security forces from both countries across the Line of Control that divides Kashmir.

How will Gujarat’s chief minister, who presided over the 2002 anti-Muslim riots, treat Pakistan once he is elected India’s next prime minister?

“He believes in positive engagement with the global community, peaceful coexistence,” Meenakshi Lekhi, BJP’s national spokesperson tells Newsweek. “But at no point will our foreign policy bow to any other nation or interest group.”

Lekhi described Modi’s foreign-policy beliefs as “India First!” (This recalls Musharraf’s own catchphrase, “Pakistan First!”) But she also said that Modi would continue India’s foreign policy, not upend or radically overhaul it. Asked about Modi’s views on Sharif, she offered: “Individual leaders in other sovereign nations are elected by the people. We have no right to interfere in their national affairs, just like they should not in ours! We have to work with all leaders in a way that India’s interests are safeguarded.”

Modi is a chai wallah, soon to be Prime Minsiter. He will do whatever it takes to stay in power for however long it takes. Even if that means making peace with Pakistan and China. Modi’s views maybe be different from that of Vajpayee but his party is the same and party policies don’t change that easily

Only India had modi to fear. Pakistan should fear Taliban more .

Modi, unlike the present PM, that India has will act decisively in relation to Pakistan.
Whether to extend the olive branch, or continue giving cold shoulders is entirely dependent upon Pakistan’s own actions infuture.