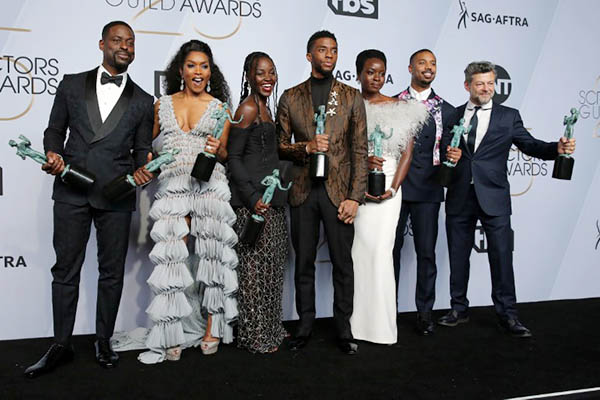 Chadwick Boseman, who plays the title role in what was the top-grossing film in North America in 2018, explained the film’s significance alongside his co-stars, nearly all of them black. “We all know what it’s like to be told that there is not a place for you to be featured, yet you are young, gifted and black,” Boseman told the audience at the Shrine Auditorium. “We knew that we had something special that we wanted to give the world—that we could be full human beings in the roles that we were playing, that we could create a world that exemplified a world we wanted to see.”

This year, the SAG Awards come at a key point in the race to next month’s Academy Awards—just after the Oscars nominations, and well before voting for the winners begins.

The Screen Actors Guild accounts for a major percentage of the 8,000-odd Oscar voters, so the SAG winners will earn a lot of awards season momentum.

Despite four nominations, A Star Is Born—the latest iteration of the classic Tinseltown story of an aging star and the ingenue he discovers—went home empty-handed. One major absentee at the 25th edition of the SAG Awards was Alfonso Cuaron’s Roma—the top Oscar nomination getter was left out of SAG contention.

While SAG-winning casts have only gone on to win a best picture Oscar about half the time, the awards are better at predicting best actor winners (79 percent) and best actress (75 percent).

Glenn Close solidified her frontrunner status in the race for the best actress Oscar with a win for her searing work in The Wife. So far this awards season, she has also won a Golden Globe and a Critics’ Choice Award.

“I just never in my wildest dreams thought I could be in a category with these men,” said Malek, who also won a Golden Globe for the role and is nominated for an Oscar.

Mahershala Ali (Green Book) continued his march to the Oscars by taking the best supporting actor trophy for his work in the civil rights dramedy.

Ali—already a Golden Globe and Critics’ Choice Award winner—stars as Don Shirley, a black pianist who hires a white Italian-American driver (Viggo Mortensen) to help him on a tour of the segregated American South in the 1960s.

Emily Blunt meanwhile pulled off a major upset, winning the statuette for best supporting actress for A Quiet Place, an innovative horror film directed by her husband and co-star, John Krasinski.

“Thank you for giving me the part—you would have been in major trouble if you hadn’t,” she quipped at Krasinski. “You are a stunning filmmaker.”

On the television side, NBC’s popular This Is Us won top honors for best drama ensemble cast for the second year in a row, while popular Amazon series The Marvelous Mrs. Maisel swept the three prizes in the comedy categories.

And Tom Hanks presented a lifetime achievement award to veteran actor Alan Alda, the star of the long-running TV comedy M*A*S*H who revealed last year that he is battling Parkinson’s disease.

“It may never have been more urgent to see the world through another person’s eyes than when a culture is divided so sharply,” Alda said to a rapt audience. “Actors can help, at least a little, just by doing what we do. (…) It can’t solve everything, but it wouldn’t hurt.”