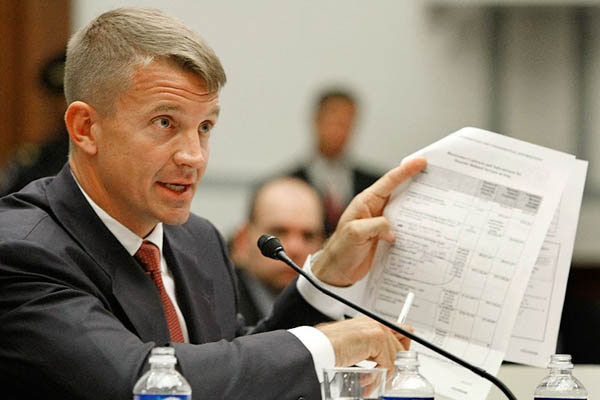 Nearly 16 years after U.S. forces entered Afghanistan, a shadowy figure from the past is making the rounds in Washington with a plan to end America’s longest war.

Erik Prince, founder of the private security company Blackwater, has resurfaced as President Donald Trump mulls over what to do about a conflict that bedeviled his two predecessors in the White House. Prince’s plan for Afghanistan would start with the naming of an all-powerful American “viceroy” who would report to the president and play a role like that of General Douglas MacArthur in post-World War II Japan.

American troops, aside from a handful of special forces, would be replaced by a private army of around 5,500 contractors who would train Afghan soldiers and join them in the fight against the Taliban. They would be backed by a 90-aircraft private air force. And all at a cost of less than $10 billion dollars a year, as opposed to the $45 billion the United States is expected to spend in 2017 on its military presence in Afghanistan.

Prince, a 48-year-old former U.S. Navy SEAL, has kept a low profile since selling Blackwater in 2010—three years after some of his employees hired to protect U.S. diplomats killed 14 unarmed Iraqi civilians in Baghdad and wounded another 17. He first outlined his Afghan proposal in an article for The Wall Street Journal in May. Since then, Prince, who currently heads Frontier Services Group, a Hong Kong-based security company, has met with U.S. officials here and made television appearances promoting his plan.

Prince, whose sister Betsy DeVos is Trump’s education secretary, says he has received a sympathetic hearing from the president’s chief strategist, Steve Bannon, and some members of Congress but a chilly reception from the Pentagon.

After taking office in January, Trump ordered a strategic review of the situation in Afghanistan, where some 8,400 U.S. soldiers and 5,000 NATO troops are assisting the Afghan security forces in battling an emboldened Taliban. Trump said on Thursday that he was “very close” to revealing his decision on how to proceed in the war-torn nation, where 2,000 U.S. troops have died since Americans first deployed there in the weeks after the September 11, 2001 terror attacks.

“We’re getting very close. It’s a very big decision for me. I took over a mess, and we’re going to make it a lot less messy,” said Trump, whose frustration with the stalemate in Afghanistan reportedly led him last month to suggest firing the U.S. commander there, General John Nicholson. Trump has given Defense Secretary Jim Mattis authority to set troop levels in Afghanistan and the retired general is said to be leaning toward boosting U.S. forces there by about 4,000 troops.

Prince, in an interview with CNN, said he has not met with Trump to discuss his plan and acknowledged that National Security Adviser H.R. McMaster, like Mattis, a former general, was not keen on the proposal. “I would say General McMaster does not like this idea because he is a three-star conventional army general and he is wedded to the idea that the U.S. Army is going to solve this,” Prince said. “But I think to the president he’s got to say, ‘after 16 years when do we to try something different?’” Prince added.

Retired generals McMaster and Mattis are not the only skeptics when it comes to Prince’s plan. “It’s something that would come from a bad soldier of fortune novel,” Republican Senator Lindsey Graham told The Washington Post. “I trust our generals. I don’t trust contractors to make our national security policy decisions.”

Sean McFate, a former military contractor in Africa and author of a book about the private security industry, The Modern Mercenary, said he considers Prince’s proposal to be “supremely dangerous and foolish.”

“There’s been no discussion about oversight, regulation, safety, accountability, control,” McFate told AFP. He said private contractors in Afghanistan would inevitably be involved in a horrific event like the September 2007 killing of Iraqi civilians by the Blackwater contractors in Baghdad. “The first time there’s a massacre we’re going to have to go in there with the Marine Corps and rescue them,” he said. “Ultimately you get what you pay for,” McFate said. “It’s like having cheap contractors fix your house. At the end of the day it takes twice as long and is four times as expensive.”

Stephen Biddle, a political science professor at George Washington University, said he considered Prince’s plan “pretty dreadful” but is not surprised it is at getting a hearing in a White House looking for a new approach. “The president isn’t very happy with the options that he’s got and is predisposed to like things that are new,” Biddle told AFP. “And Republicans in general tend to like privatization. But not all new ideas are good ideas.”