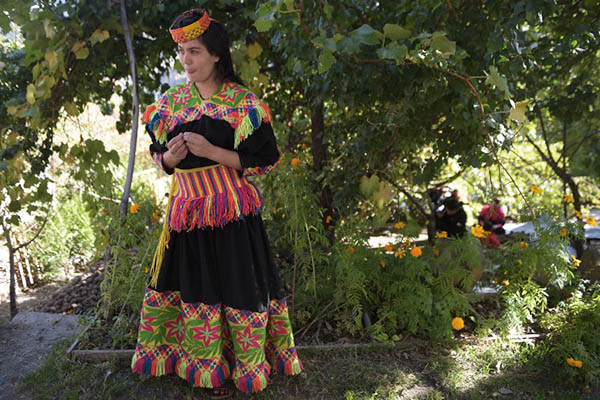 Conservative Muslims in Pakistan’s northwest are blaming the animist Kalash for a powerful earthquake that flattened entire villages in October, claiming their immoral ways provoked Allah’s wrath, in the latest attack on a diminishing tribe fighting to keep its identity alive.

Residents of Chitral district are still reeling from the 7.5 magnitude quake, which ripped through Afghanistan and Pakistan killing more than 390 people and leveling thousands of homes. It came just three months after floods also devastated Chitral, leaving thousands of families camping in the open as winter approaches.

Chitral’s verdant, plunging valleys have long attracted tourists for their natural beauty and their brush with legend as the home of the ancient, polytheistic Kalash. Pakistan’s smallest religious minority, they speak their own language and celebrate their gods through music, dance—and alcohol, which they brew themselves for rituals and consumption, but many Muslims in the region feel Allah, angered by such un-Islamic practices, has smote the region with natural disasters.

“People are saying that the earthquake came because of the Kalash,” says student Shira Bibi, who spoke to AFP in the village of Brun, nestled in the Bumburate area of the valleys. Her face is uncovered and her clothing, a deep black, is intricately embroidered across the shoulders, as is the wide belt slung across her waist. Her long, dark hair is braided beneath a beaded headpiece—in the traditional Kalash style.

Shira, who studies at a college in Chitral town came back to Brun after the quake.

“An old man in Chitral town said ‘Look, daughter, don’t walk around like that, don’t you see earthquakes are striking, floods are coming, because of you?’” Shira said. “I was wearing Kalash dress when he said this. People keep saying things like that.”

Academics have speculated the Kalash might be descended from the ancient Middle East or even from soldiers of Alexander the Great’s army, which conquered the area in the fourth century B.C. Centuries ago they ruled Chitral but now they are a minority in the valleys, with their population reduced to just a third of the 12,000 residents, according to the Kalash Peoples Development Network (KPDN), a local organization.

KPDN chair Luke Rehmat said the Kalash are being subjected to “institutional conversion.”

“The Kalash people are being discouraged in society and told to get rid of their religion in a systematic way,” he said.

Until this year, Kalash was not recognized as a religion under the National Database and Registration Authority, and Rehmat says that in schools Kalash are given no alternative to Islamic studies. “In other parts of Pakistan non-Muslims have ethics as a subject in lieu of Islamic studies, but here the students have no choice.”

Teachers in Kalash tell the students that Islam is a “superior religion,” he claimed, branding it “brainwashing.”

“Ultimately when they grow up, they don’t have knowledge of their own Kalash culture and traditions, religions. And they are turning to other sides.”

Up to 100 Kalash have converted to Islam in the past few years, according to Rehmat, sometimes causing a strange family dynamic.

Diana Bibi, who lives in Brun, has an elder sister who converted to Islam and married in Peshawar. Now her sibling wears a niqab even when visiting her parents in Kalash, and refuses to attend the family’s religious ceremonies. “It’s a big problem,” Diana said. Asked if she might also convert, Diana giggles: “Yes! I will go to heaven and have 70 virgins.”

Osama Ahmad Warraich, Chitral deputy commissioner, denies any Kalash are being forced to become Muslim. “They are basically poor people belonging to a low income group and people from other parts of the country give them money to convert,” he tells AFP—in particular, “rich Muslims who want to marry Kalash girls.”

He also says the government is carrying out a number of local projects to help preserve Kalash culture, including donating land for a graveyard and recognizing their economic potential. “We are trying to revive tourism in the region by preserving the Kalash culture as it’s the best tourist attraction in the country,” he says.

Zafar, a Kalash who goes by only one name, said not all Muslims in the valleys blame his tribe for the disasters. “The trend of discouraging Kalash people from practicing their faith is very old and I would not blame all Muslims for it, neither do all the Muslims here see the Kalash as being behind all the doom and destruction,” he said.

I take serious offence of this Piece. I am from Chitral and a Muslim. We Saw Floods and now earthquake and the whole valley helped each other. No body cares if they are Kalash or Muslims, they and other Muslims from Chitral have been helping each other. I have prayed in many mosques, attended many Jumma Sermons, attended many relief distribution ceremonies and before reading this ‘Item Number’ I did not even think of something like this. Not once have I heard anyone blaming them for natural disasters. If you have pre-written article and an agenda then you will definitely find one or two people out of 500,000 who will agree with you. 80% of the article is about Kalash converting and the title is about Locals blaming Kalash for Earthquake.

Well there are Insane people everywhere.. So is it necessary that you project the 0.0001% insane people to be the Views of the remaining 99.999% people…
…
It only predicts your insanity in search of news !!!