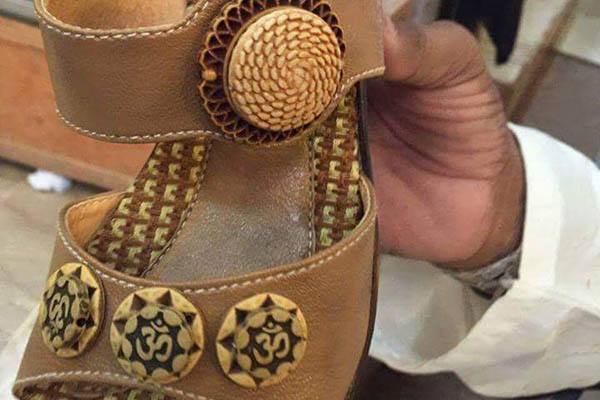 Hindus in Sindh province are demanding police file a blasphemy case against Muslim shoemakers who are marketing footwear decorated with the symbol of ‘Om’—a mantra in Hinduism—ahead of the upcoming Eid-ul-Fitr.

“Our community is taking this matter very seriously and does not want their religious symbol disrespected,” says Dr. Rahmesh Kumar Vankwani, the patron-in-chief of the Pakistan Hindu Council. “Why would they [shoemakers] be making and selling shoes with our sacred words if they don’t intend to insult the Hindu faith?” he added. According to Vankwani, local residents have alleged that shoemakers in the region have been selling the controversial footwear for the past three years with impunity because no one has tried to stop them.

Raj Kanwal, a local Hindu resident, said the blasphemy law should be applied uniformly. “If Muslims are hanging Christians and Hindus after leveling blasphemy charges without any proof, then why shouldn’t the same principle be applied to them for committing blasphemy against other religions?” he asked. “They [Muslims] claim Islam teaches tolerance and respect for all religions but they don’t appear to practice this. Isn’t it blasphemy if they disrespect our religion?” he added.

Pakistan Hindu Seva, a group established to promote religious harmony, said a shop in Sindh’s Tando Jam town was selling the shoes decorated with ‘Om.’ A statement issued by the group says: “The shopkeeper, selling it intentionally or unintentionally, must be barred from selling [the shoe] because it is hurting the sentiments [of Hindus] and spreading hatred, which might turn into a violent response.”

There has been no official response to the Hindu community’s demands.

Under Section 295 of the Pakistan Penal Code, “deliberate and malicious acts” that provoke outrage over religious beliefs can be punished with imprisonment of up to 10 years, or a fine, or both.