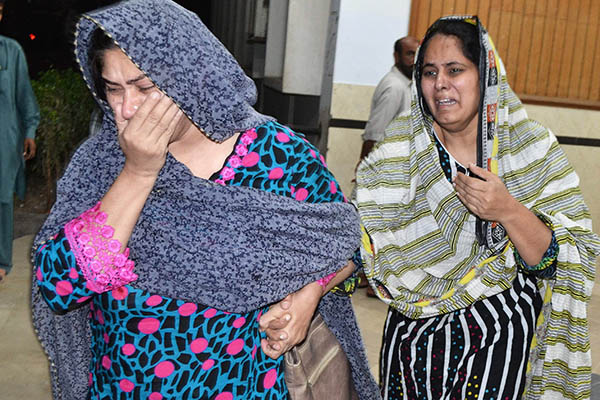 Rashid Rehman’s relatives at hospital after his killing. SS Mirza—AFP

“Armed gunmen stormed the chamber of Rashid Rehman and started indiscriminate firing on Wednesday evening, injuring Rehman and two of his associates present there,” said senior police official Zulfiqar Ali. He said the three were rushed to Nishtar hospital where doctors pronounced Rehman dead upon arrival while the two wounded were receiving treatment.

Rehman was representing Junaid Hafeez, a lecturer at Bahauddin Zakariya University, accused of making derogatory remarks against Islam’s Prophet in March last year. Hafeez was known for his liberal views at the university and the case of blasphemy was registered after pressure from right-wing student groups, said a student, who wished not to be named.

An official at the independent Human Rights Commission of Pakistan said for a year no lawyer was prepared to take up the case over fears of attacks from extremist religious groups. But Rehman, who was also a rights activist and coordinator of the HRCP, decided to defend Hafeez.

During the first hearing in March this year, which took place inside a prison for security reasons, Rehman received threats from the lawyers representing the complainant. “During the hearing the lawyers of the complainant told Rehman that he wouldn’t be present at the next hearing as he would not be alive,” said the HRCP in a statement issued after the incident in March.

According to the HRCP, Rehman was threatened in the presence of the judge.

Pakistan has strict laws against defaming Islam, including the death penalty for insulting Islam’s Prophet, and rights campaigners say they are often used to settle personal disputes. A recent report from a U.S. government advisory panel said Pakistan used blasphemy laws more than any other country in the world, listing 14 people on death row and 19 others serving life sentences for insulting Islam.