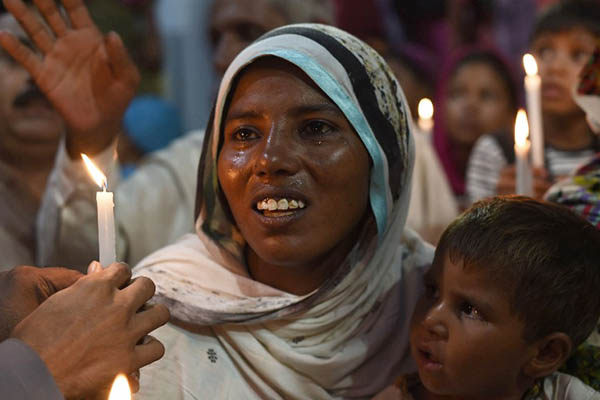 Shama Bibi’s sister attends a protest against the mob lynching of her relatives. Arif Ali—AFP

The family of Shama Bibi and Shahzad Masih fear public retribution over a year after their brutal lynching.

Four-year-old Aliya’s life collapsed last year when her illiterate Christian parents were falsely accused of tossing out pages of the Quran in their rubbish, and then lynched and burnt on a brick kiln by an angry mob. The mob killing of Shama Bibi and Shahzad Masih triggered outrage in Pakistan, where desecration of Islam’s holy book is legally punishable by death and even unproven allegations of blasphemy often lead to bloody killings at the hands of vigilantes.

After the ordeal on Nov. 4, 2014, Aliya, which is not her real name, left the dusty brick factory where even as a toddler she had worked with her family as bonded laborers. Five other Christian families also fled.

Now she comes home from school every day, wearing her backpack and new shoes, to the lower-class area of Lahore where she lives with her maternal grandfather, elder brother and sister. The children play cricket on the roof terrace of the tiny, two-room concrete house, with a view of a dusty track lined with small rivers of sewage. But their hearts are not in their new lives, built far away from the factory—even as Christmas approaches.

“The children often cry for their parents,” sighs their grandfather, who AFP is not naming, saying that even a year on the family does not feel safe. Their sense of insecurity persists even though authorities have taken unusually strong measures to protect people like Shama and Shahzad, who were found to be falsely accused.

The police have traditionally been reluctant to clamp down on those who take part in mob violence for fear of enraging Islamists. But with the country’s top leadership seemingly more determined to tackle religious extremism in the wake of a Taliban school massacre last year that left more than 150 dead, matters could be slowly changing.

Pakistani courts appear to have shifted to a more moderate stance on blasphemy recently, warning against false accusations and bailing one accused after she had languished in jail for three years. In the Christian couple’s case, more than 100 people are still in jail—including the factory owner, who has been accused of locking them up when they tried to flee as the blasphemy allegations gathered steam because he thought they would default on their debt to him.

Five other factory executives are also imprisoned, as well as two Muslim clerics accused of spreading the rumor and encouraging the mob to attack the couple.

Pakistan inherited its blasphemy law from former colonial power Britain, which devised the code to ensure communal harmony in then undivided India. New sections were introduced in the 1980s under military ruler General Zia-ul-Haq, which elevated Islam above all other religions and introduced the death penalty as part of his broader Islamization agenda.

Critics say the law, often misused by people carrying out personal vendettas, is feeding violence particularly against minorities. “Such legislation can cause hatred, prejudice, and within that prejudice, may cause violence,” says human rights activist Hina Jilani.

Though Pakistan has never executed a blasphemy convict, more than 50 people accused of the crime have been killed before their trials were completed and 17 are currently languishing on the charge on death row.

What happened to the couple, though it sent shock and anger through the country, is far from unique. At least seven other people were murdered by vigilantes last year after being accused of supporting or committing blasphemy, though none this year.

In the case of the Christian couple it emerged after the brutal killing the allegations were unfounded, as often happens. Shahzad’s father, a faith healer who used pages with inscriptions in many languages for his work, had died shortly before the incident. The family was burning documents that belonged to him.

In the red mud fields where the couple worked for 20 years under the towering chimney of the brick kiln, they are remembered by the ragged, poverty-stricken wretches who labored alongside them as “good people.”

“They were workers like us, our brothers. What happened to them is unfair and we are sad,” said Rasheed Muhammad, one of their Muslim colleagues. Shahzad’s elder brother Iqbal, who also worked at the factory, said he still fears for his life, and police have to escort him to his court appearances. “They could take us too,” he said.

Riaz Anjum, the family’s Christian lawyer, says he is “100 percent sure that they will get justice,” and the killers will be held to account, despite the slow pace of the legal process. But real change, he said, would only come when the law is amended—a cause that Pakistan’s government has not pushed for since 2011, when two political leaders who spoke out against the legislation were killed. Until such time, he sighs, “blasphemy remains a sword over our heads.”