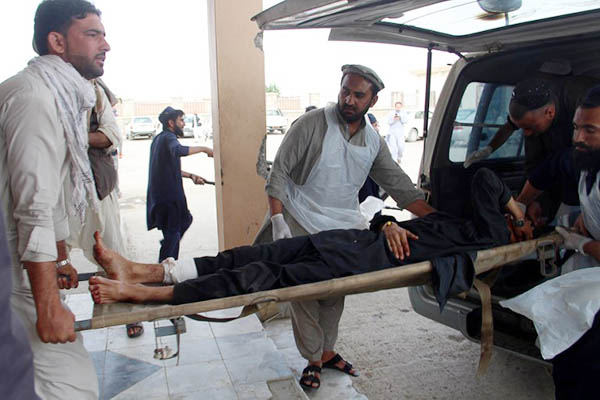 A blast at a voter registration center in Afghanistan’s restive east on Sunday killed at least 13 people and wounded 33, a health official said, capping a bloody week in the war-torn country.

The bomb had been placed in a tent being used to register voters on the grounds of a mosque, marking the latest attack on preparations for long-delayed legislative elections. “A crowd of people who had come out of the mosque had gathered to register” when the blast took place, Khost provincial police chief Abdul Hanan Zadran told AFP. Zadran said the casualty toll stood at “about 30.”

But provincial deputy director of public health Gul Mohammad Mangal told AFP at least 13 people had been killed and 33 wounded in the explosion. Among the dead was a female election worker.

Mangal warned the toll could rise, with several of the wounded in a critical condition. “Ambulances are still bringing more people,” he added.

There was no immediate claim of responsibility, but the Taliban said it was not involved in the explosion.

It was the latest attack on election preparations and comes almost a week after 25 people were killed in a double bombing in the Afghan capital Kabul. Nine journalists including AFP chief photographer Shah Marai were among the dead. BBC reporter Ahmad Shah was killed in a separate attack in Khost province.

The latest assault on a voter registration center is likely to deter more people from signing up for the long-delayed parliamentary and district council elections scheduled for Oct. 20.

On April 22 a suicide bomber blew himself up outside a voter registration center in Kabul, killing 60 people and wounding more than 100. That was among a series of attacks across the country on places where people were signing up to vote.

In a separate incident on Sunday, six Indian engineers were kidnapped along with their Afghan driver in northern Afghanistan, officials said.

The Taliban and I.S. have made clear their intentions to disrupt the elections.

Officials are concerned that a low voter turnout will undermine the credibility of the poll. Just over 1.2 million adults had registered by Saturday, three weeks after the two-month long process began, data compiled by the Independent Election Commission (IEC) showed.

The IEC, which is overseeing preparations for the vote, hopes to register up to 14 million adults at more than 7,000 polling centers. But if the current trend were to continue, fewer than three million people would be registered by the mid-June deadline.

Authorities have deployed planes to drop leaflets in a number of provinces raising awareness about the elections, which are seen as a test run for next year’s presidential poll.

A radio and television campaign is also under way and civil servants have been granted a day off to sign up. The IEC has placed many of the voter registration centers inside schools and mosques, triggering concerns that students and worshippers could be at risk.

Another hurdle to voter registration is a sticker placed on national identification certificates showing the holder has signed up for the poll. There are concerns that the stickers could put voters in restive districts at risk of being targeted by Taliban or Islamic State militants.