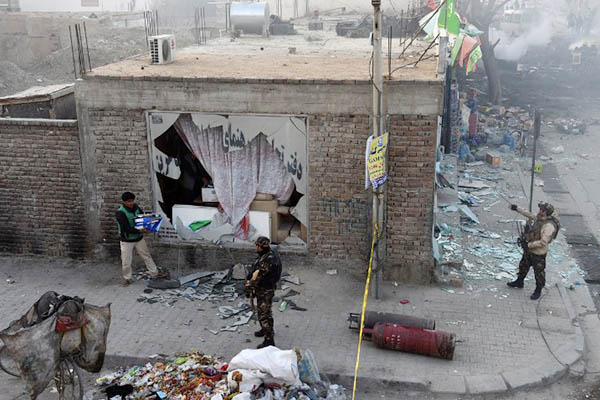 Police say at least one person killed, 19 others injured in explosion.

A suicide car bomber rammed into a bus carrying employees of one of Afghanistan’s biggest telecom companies during rush hour on Monday, just days after a deadly insurgent assault on the country’s largest military hospital.

At least one woman was killed and 19 others wounded in the powerful blast, which left the Roshan Telecom bus badly mangled and the area littered with smoldering debris and twisted metal.

No group has so far claimed responsibility for the assault, but it comes as the Taliban step up attacks even before the official start of the annual spring offensive. “Kabul Police have arrested three suspects related to an explosion in which 19 civilians, including four women, were wounded and one woman was killed,” interior ministry spokesman Sediq Sediqqi said on Twitter.

A Roshan official confirmed to AFP that a number of employees were wounded in the attack, but declined to say whether their vehicle was the intended target.

Security officials cordoned off the area as firefighters and ambulances rushed to the scene as clouds of smoke filled the air.

The bombing comes after gunmen disguised as doctors stormed Sardar Daud Khan hospital in Kabul last Wednesday, with insiders including two interns among the attackers, multiple surviving staff and security sources told AFP. The defense ministry insists only around 30 people were killed by five attackers. But security sources and the survivors, some of whom counted dead bodies, said the death toll exceeded 100.

The carnage inside the heavily guarded hospital points at a spectacular intelligence failure and spotlights how insurgents have managed to infiltrate top government and military institutions in Afghanistan. The savagery of the assault was characterized by how the assailants stabbed bed-ridden patients, threw grenades into crowded wards and shot people from point-blank range.

The Islamic State group claimed it was behind the attack via its propaganda agency Amaq—hours after the Taliban denied responsibility. But the survivors AFP spoke to said the attackers chanted “Allahu Akbar” and “Long live Taliban” in Pashto. The Afghan defense ministry said a government commission had been set up to investigate the attack.

The violence underscores rising insecurity in Afghanistan. The country is bracing for an intense fighting season in the spring as the government’s repeated bids to launch peace negotiations with the Taliban have failed.

Afghan forces, already beset by record casualties, desertions and non-existent “ghost soldiers” on the payroll, have been struggling to beat back insurgents since U.S.-led NATO troops ended their combat mission in December 2014.

Kabul last month endorsed U.S. General John Nicholson’s call for thousands of additional coalition troops to hold off the militants before the spring offensive. Extra troops were needed to end the stalemate in the war, Nicholson, the top American commander in Afghanistan, told the U.S. Congress in what could be President Donald Trump’s first major test of military strategy.