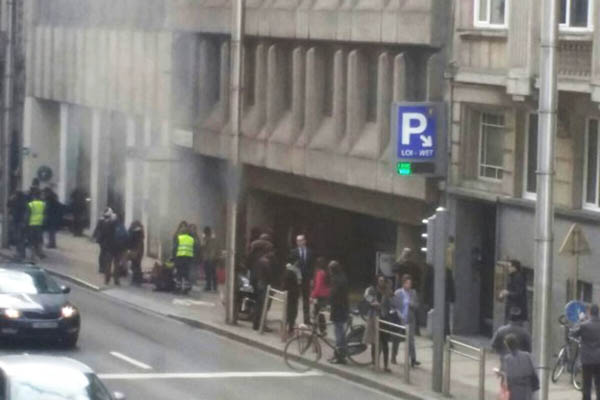 Smoke rises from the Maalbeek underground in Brussels following a blast at the station. Seppe Knapen-Belga—AFP

At least 21 people killed, several others injured in attacks on transport infrastructure.

Two explosions targeted the main hall of Zaventem Airport at around 8:00 a.m., with a third hitting the Maalbeek metro station near the European Union’s main buildings, just as commuters were making their way to work in rush hour.

Pierre Meys, spokesman for the Brussels fire brigade, told AFP at least 21 people had been killed—11 at the airport and “around 10” more at the metro station.

There were chaotic scenes at the airport as passengers fled in panic, with a thick plume of smoke rising from the main terminal building. The blasts smashed the windows of the departure hall and sent ceiling tiles shattering to the floor.

“We heard the explosion and felt the blowback,” Jean-Pierre Lebeau, a French passenger who had just arrived from Geneva, told AFP, adding that he had seen wounded people and “blood in the elevator.”

Witnesses told Belga news agency there had been shots and shouts in Arabic before the blasts hit the airport on the northwest outskirts of Brussels. At Maalbeek station, at least 15 people with bloodied faces were being treated by emergency services on the pavement, an AFP reporter said.

The explosions triggered a transport shutdown in the city that is home to the headquarters of both the E.U. and NATO. Flights were halted with metro, tram and bus services all suspended. “These attacks mark another low by the terrorists in the service of hatred and violence,” said E.U. President Donald Tusk.

The bloodshed comes days after the dramatic arrest in Brussels on Friday of Salah Abdeslam—the prime suspect in the Paris terror attacks claimed by the Islamic State group that killed 130 people in November—after four months on the run.

Airports in a string of cities across Europe swiftly announced they were boosting security, including in London, Paris, Frankfurt, Amsterdam, Copenhagen and Prague.

Interior Minister Jan Jambon announced that Belgium’s terror threat had been raised from three to a maximum of four, and the country’s national security council was due to meet. Brussels residents were told to “stay where you are,” while Deputy Prime Minister Alexander De Croo urged people to avoid making calls to stop the city’s mobile networks getting saturated, and to communicate with online messages instead.

Sweden’s Prime Minister Stefan Lofven branded the blasts an “attack against democratic Europe.” British premier David Cameron tweeted that his country would do “everything we can to help,” and announced that Britain’s COBRA security committee would meet Tuesday.

Russian President Vladimir Putin said the blasts “show once more that terrorism knows no borders and threatens people all over the world,” according to a Kremlin statement. “The fight against this evil requires vital international cooperation,” he added.

The blasts come as Abdeslam, Europe’s most wanted man, remains in a high-security prison in Belgium following his arrest last week in the gritty Brussels neighborhood of Molenbeek, just around the corner from his family home. Belgium’s Foreign Minister Didier Reynders said at the weekend that Abdeslam—believed to have played a key logistical role in the carnage in Paris—had been planning some sort of new attack.

At the airport, Jean-Pierre Herman and his wife Tankrat Paui Tran embraced with shock on their faces. “My wife just arrived,” Herman said. “I said hello, we took the elevator and in the elevator we heard the first bomb. When we came out of the elevator at that moment the second bomb exploded and then we saw doors flying, [the] glass ceiling come down and smoke.”

An AFP correspondent said roads to the airport had been blocked and trains halted. Charlotte McDonald-Gibson, a British journalist living in Brussels, said there had been “total confusion” at the airport, where she was having breakfast. “Suddenly staff rushed in and said we have to leave,” she said. “They rushed out and into the main terminal A departures building. Nobody knew what was going on. It was total confusion, people were just standing around wondering what was happening.”