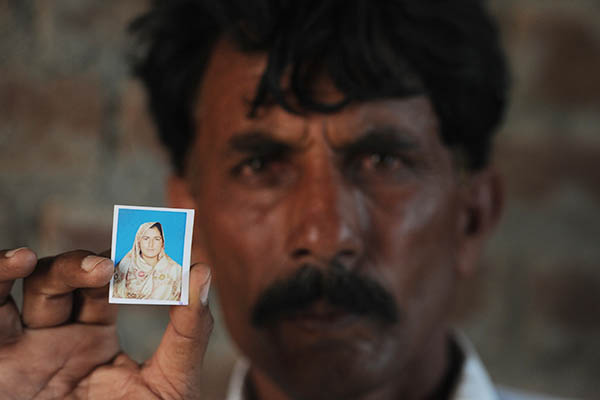 Investigator alleges Farzana eloped with her husband despite already being married, accuses media of ‘inaccurate’ reporting.

Police denied negligence on Saturday over their failure to stop the bludgeoning to death of a woman outside a courthouse, describing it as a simple murder case despite a chorus of global condemnation.

Farzana Iqbal died on Tuesday after over two-dozen attackers, including numerous relatives opposed to her marrying against her family’s wishes, pelted her with bricks outside the Lahore High Court. Police were present at the scene but did not stop the mob killing Iqbal, who was three months pregnant.

Iqbal’s father Mohammad Azeem was detained at the scene of the attack. Four others, including an uncle, two of her cousins, and a driver were arrested late Thursday.

Senior officer Zulfiqar Hameed defended his men’s actions, saying one had snatched a gun from an attacker, but claimed the mob was too large for police to stop the killing. He also blamed foreign media for their “inaccurate” description of events. “It is a routine murder case like other murder cases and has to be seen in the context of Pakistani society,” said Hameed.

“The foreign media is wrongly describing it as stoning without seeing the background of the two families, which is not good and which resulted in this incident,” he added.

Hameed also claimed Iqbal’s husband Mohammad Iqbal had absconded from justice for four years after murdering his first wife, and alleged that Iqbal had eloped with him despite already being married.

Mohammad Iqbal—who Thursday admitted he had strangled his first wife out of love for Farzana—has said he wants to see her attackers “killed with bricks.”

He was spared jail for his first wife’s murder because his sons persuaded her family to pardon him under Pakistan’s blood-money laws. These allow a victim’s family to forgive the murderer, which makes prosecuting so-called “honor” cases difficult as the killer is usually a relative.

In a further complication to the case, defense lawyer Mansoor Khan Afridi on Saturday claimed Iqbal had abducted Farzana two years ago, when she was already married to her cousin Mazhar Iqbal. “Mohammad Iqbal developed illicit relations with Farzana and used to visit her when her husband Mazhar Iqbal was not at home,” Afridi said. “Later Iqbal kidnapped her.”

The lawyer claimed Mohammad Iqbal then obtained another marriage certificate, a crime if Farzana was already married to another man, he said.

Afridi said that cases of abduction and unlawful marriage had already been registered with police.

Farzana was at court to testify in Iqbal’s defense when she was killed, after he was accused by her relatives of kidnapping her and forcing her into marriage.

Hundreds of women are murdered by their relatives in Pakistan each year in the name of defending family “honor.” Last year, 869 women died in so-called “honor killings,” according to the independent Human Rights Commission of Pakistan.