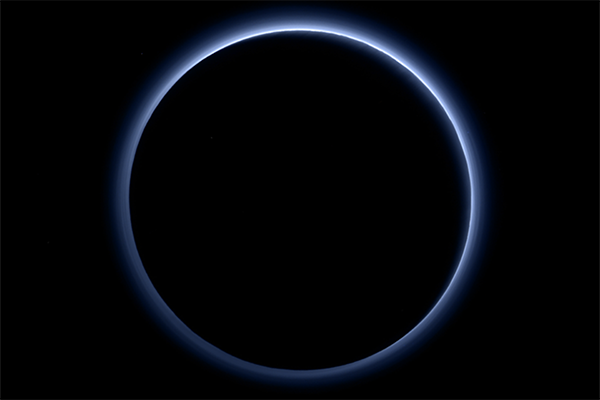 Pluto has blue skies and patches of frozen water, according to the latest data out Thursday from NASA’s unmanned New Horizons probe, which made a historic flyby of the dwarf planet in July.

Never before has Pluto—a resident of the distant Kuiper Belt, a frigid region of the solar system beyond Neptune that is home to many comets and asteroids—been observed in such detail.

“Who would have expected a blue sky in the Kuiper Belt? It’s gorgeous,” said Alan Stern, New Horizons principal investigator from Southwest Research Institute in Boulder, Colorado. Along with the announcement, NASA released an image showing a blue layer of haze around Pluto, taken by the New Horizons spacecraft’s camera.

Blue skies are seen on Earth because of the scattering of sunlight by very small particles of nitrogen. “On Pluto they appear to be larger—but still relatively small—soot-like particles we call tholins,” said science team researcher Carly Howett, also of SwRI.

NASA said the “second significant finding” from New Horizons’ latest trove of data is that there are numerous small, exposed regions of frozen water on Pluto. Using a tool called a spectral composition mapper on New Horizons, scientists have been able to map the signatures of water ice on various parts of the planet’s surface.

“Large expanses of Pluto don’t show exposed water ice,” said science team member Jason Cook of SwRI. “Because it’s apparently masked by other, more volatile ices across most of the planet. Understanding why water appears exactly where it does, and not in other places, is a challenge that we are digging into.”

The areas that seem to contain the most water ice also appear bright red in recent color images of Pluto. “I’m surprised that this water ice is so red,” said Silvia Protopapa, a science team member from the University of Maryland, College Park. “We don’t yet understand the relationship between water ice and the reddish tholin colorants on Pluto’s surface.”

On July 14, New Horizons, a nuclear-powered spacecraft about the size of a baby grand piano, became the first spaceship to pass by Pluto. It will continue to send data back to Earth until late next year. NASA says the spacecraft is pressing on and is in good working order some five billion kilometers from Earth.