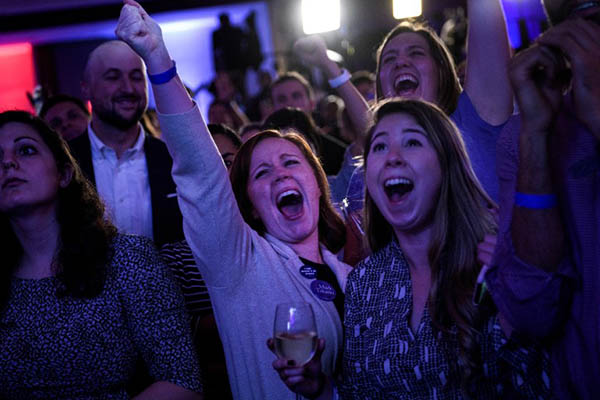 Millions of Americans voted on Tuesday, and results have been projected in several races in the U.S. midterms, the critical first nationwide election seen as a referendum on Donald Trump’s presidency.

Here is the state of play so far:

The House of Representatives has flipped from Republican control into the hands of the Democrats, U.S. networks projected. Early results showed Democrats winning pick-ups in congressional districts in Virginia, Florida, Pennsylvania, Colorado and New Jersey, as voters there sent a message of repudiation against Trump.

The non-partisan Cook Political Report is forecasting a Democratic gain of at least 30 seats in the 435-member House. Democrats needed to gain 23 seats to reclaim control. It was a different story in the 100-member U.S. Senate, where Republicans retained their control, U.S. networks projected.

The party drew blood in Indiana, ousting one-term Democrat Joe Donnelly in a state that had been seen as a must-win for Democrats seeking to gain control of the upper chamber. Doubling the Democratic pain, North Dakota Senator Heidi Heitkamp crashed to defeat against Republican state lawmaker Kevin Cramer.

Democrats were defending a whopping 10 seats in states won by Trump in 2016. A few had already won re-election on Tuesday, including in Ohio, Pennsylvania, West Virginia and Wisconsin. But in addition to Donnelly and Heitkamp, Missouri’s Claire McCaskill faces serious risk of defeat.

The marquee governor’s race, in Florida, is a nail biter. Andrew Gillum, the mayor of Tallahassee, is aiming to become the state’s first African-American chief executive. But he trails Republican Ron DeSantis by 1.1 percentage points, with nearly all precincts counted in the state, according to the Orlando Sentinel.