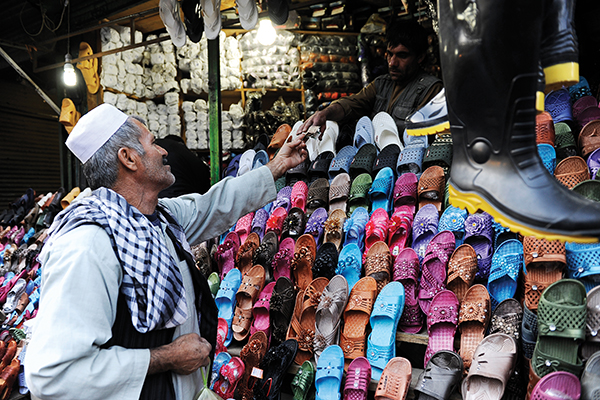 It’s a blessing of sorts that in a violent country like Afghanistan, where an AK-47 is often used to settle scores, the throwing of shoes for self-defense and to shame and humiliate an opponent has become common practice, a part of the culture. Hitting someone with shoes—widely considered dirty, lowly, and loathsome objects—is meant to deliver both disgrace and embarrassment.

Women are not the only ones defending themselves by shoe-throwing on the streets of Kabul. Parliamentarians, too, are using their shoes as a weapon of choice inside the chamber. “In Parliament, shoe-throwing happens all too regularly and will keep on happening,” says an M.P. who last year threw his shoes, and anything else he could grab, at an insulting colleague. Also last year, a woman M.P. known as “The General” for her martial manners struck another woman M.P. with her shoes, then quickly descended two rows and began punching her opponent.

A young medical student and body builder, Jalil Parwani, learned his lesson about not harassing young women on the streets the hard way. He and his friend were biking home from the Kabul Medical University earlier this year when they came across six female students walking home. Parwani began to harass them, he recalls. He says he shouted at one: “You look like a princess walking so nicely and romantically.” The girls ignored him and then ducked into a hamburger shop.

Parwani and his friend followed. He told the cook loudly, “Don’t make the burgers too hot,” he recalls saying. “We don’t want to burn their beautiful lips.” With that the two young men were hit by a barrage of shoes thrown by the girls. He says the one he called a princess hit him harder than the others. “Some of those shoes are made of heavy leather and really hurt a lot,” he says. Immediately, everyone in the shop began laughing at the two red-faced young men. “It was the worst and most shameful experience of my life,” he says. “There’s no greater shame in our culture than to be hit by women’s shoes,” he adds.

But even worse things can happen to a man who is harassing women on the street than being hit and humiliated by a well-thrown shoe.

Safia Safi, a third-year Kabul university student and ethnic Pashtun from eastern Afghanistan, was recently harassed by a young man on a Kabul street. She immediately threw her shoes at him. But as her molester ran off he took Safi’s shoes with him, forcing her to walk home barefoot. Safi’s brother exploded when he heard the story. He quickly grabbed a knife, she says, and ran after the man, threatening to kill him. “He should have known that it’s not wise to bother Pashtun girls,” she says. “Harassing us could mean certain death. Bad manners should be severely punished,” she adds angrily. Every Afghan woman would heartily agree with that.