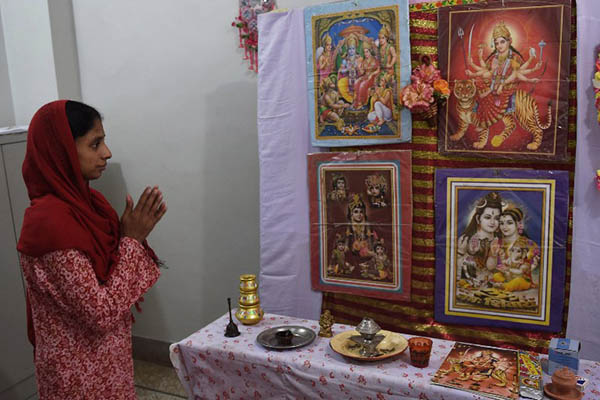 Indian government has pledged to bring Geeta home 13 years after she was found in Pakistan.

Deaf and mute, Geeta has been stuck in Pakistan for 13 years, unable to return to her native India because she cannot remember or explain exactly where she is from. But after repeated false dawns, Geeta has new reason to hope.

Geeta, aged in her early 20s, lives in a women’s shelter in Karachi run by the Edhi Foundation, Pakistan’s largest welfare organization. News of her plight surfaced in 2012 but no progress was made in tracing her roots. But India’s High Commissioner to Pakistan T. C. A. Raghavan visited Geeta on Tuesday evening to collect preliminary information, which could help track down her home and parents. And afterwards Indian Foreign Minister Sushma Swaraj vowed to bring the story to a movie-style happy ending, tweeting: “We will bring Geeta back to India.”

It is still unclear how long the formalities will take or whether her hometown has been identified.

Although she cannot speak, Geeta can write the words “Telangana”, the name of a state in southern India, and “Peddavura”, the name of a village, in Hindi along with the number 193. Edhi officials speculate this may have been the number of her house. Her memory of how she came to be in Pakistan is hazy and her account, communicated through improvised sign language, has changed over time.

When AFP met and interviewed her in 2012 she said she ran away from home after quarrelling with her parents but this week she said she remembered losing her family at a big Hindu festival near a river. Geeta, then aged 11 or 12, had no identity papers when she was found by police alone and disorientated on a train that had crossed the border into Lahore. Even the name Geeta was given to her by Edhi staff. She was handed over to Edhi officials, who have looked after her ever since.

“They told us that she would be mistreated in jails and pass through cumbersome judicial process and still her destiny was not sure,” said Faisal Edhi, the organization’s acting chief. “So they handed the girl to us so that she could be properly looked after.”

Ties between Pakistan and India, which have fought three wars since 1947 and have several intractable territorial disputes, are perpetually thorny. Geeta’s plight is slightly better than that endured by Pakistani and Indian fishermen, who are regularly detained by the other side for straying into disputed waters and can languish in jail for years before being allowed to return home.

Raghavan, the Indian high commissioner, said he was confident Geeta’s family would soon be traced despite recent tensions between the two nations.

“There have been ups and downs in the relations between the two countries, but the relations of humanity always remain intact,” he told reporters after meeting Geeta.

In Karachi she lives at an Edhi shelter for women and girls in a bustling area of the old city, where they discovered she was Hindu and set up a place for her to worship. Geeta rings bells and lights incense and earthenware lamps to pray to different Hindu gods, whose images are kept on a table topped with a white cloth.

“She worships her deities in the temple and also offers prayers with her Muslim fellows and even fasts in the holy month of Ramzan,” Edhi said.

The foundation has made repeated attempts to trace Geeta’s family but with no success. “In 2013, an Indian diplomat visited us to know about Geeta but he also warned that she might languish in jails in India as she had no traveling or identification documents,” Edhi said. “So we chose to let her stay with us instead of pushing her to some other ordeal.”

Edhi hopes the success of Bajrangi Bhaijaan, one of the biggest hits in the subcontinent this year, will jog someone’s memory and help reunite her with her family.

Geeta watched the movie recently, Edhi said, breaking down in tears at the climactic scene when the heroine is reunited with her mother—and leaving more determined than ever to go home. Her eyes glistening, Geeta told of her hopes through sign language—getting her photo taken for a passport and then flying to India.

“I love my home back there,” she said, making a heart gesture with her hand. “Here I am sad.”