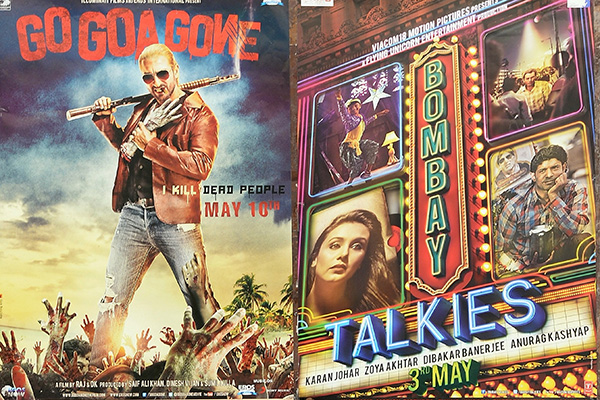 India’s movie industry toasted its 100th birthday on Friday with the release of two films celebrating its humble origins in the silent era and the influence of glamorous modern-day Bollywood.

Bombay Talkies comprises four short stories inspired by India’s love of cinema, created by some of the country’s leading filmmakers. “You usually celebrate birthdays and that’s what we are doing today. Indian cinema turns 100 and we are acknowledging that,” said Zoya Akhtar, who directed the film along with Karan Johar, Anurag Kashyap, and Dibakar Banerjee.

The movie will have a special gala screening at the Cannes film festival this month, where India is to be honored as the “guest country” in its landmark year.

“The four short stories are about passion for cinema and ingredients like drama, music, dance, and entertainment. All of these ingredients are a huge part of our films and culture,” said co-producer Ashi Dua.

Its release comes 100 years to the day since the opening in Bombay (now Mumbai) of Raja Harishchandra, the first all-Indian, silent feature film, based on the tale of a virtuous king from the Hindu epic Mahabharata. It marked the birth of one of the world’s most vibrant film industries, which produced almost 1,500 movies last year in various languages and corners of the country, with Hindi-language Bollywood leading the way.

While Bombay Talkies explores life in the present, the second film opening on Friday is the award-winning Celluloid Man, which pays tribute to the founder of the National Film Archive of India, P. K. Nair. The documentary, so far only shown at festivals, showcases Nair’s lifetime dedication to preserving films that date back to the silent era, and it is peppered with clips from historic black-and-white productions.

Thanks to the efforts of 80-year-old Nair, nine silent films out of 1,700 made in India have been preserved, although no records remain of many others. “Almost 70 percent of the films made before 1950 are lost, including some real gems like the first talkie,” Nair said, referring to the first Indian film with sound, 1931’s Alam Ara. He said digital technology would help to preserve the cinematic gems that still exist for future generations. “There are currently about 12,000 films awaiting digitization.”

Indian Cinema has a rich and diverse cultural history. It has made a mark in the performing arts. The Films produced from the beginning set atone in the right direction. Many Indian movies have won acclaim and prestigious awards at the International film festivals .

We congratulate India and cinema makers from artists to the behind the scene workers for their excellent work.

Black and white era movies not only enthralled the viewers but also established the India Cinema as the major Industry. It took a humble start from Bombay Talkies the famous production house and grew into a giant Bollywood film industry. we felicitate the Bollywood on 100th birth day. It has given as wide range movies from serious art movies to comedies. It has always kept the element of entertainment and artistic value setting standards .