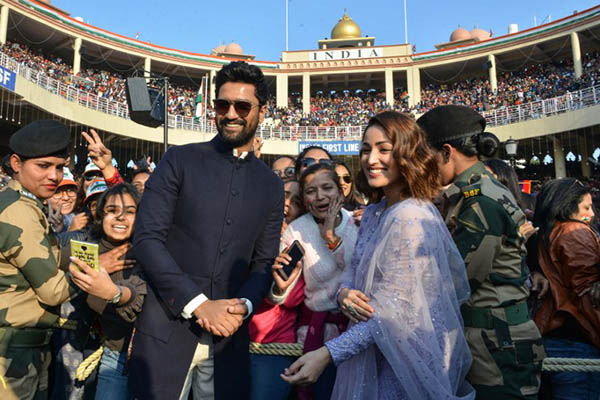 Actors Vicky Kaushal and Yami Gautam pose for photographs during a promotion for ‘Uri’. Narinder Nanu—AFP

The lights dimmed and India’s national anthem drew patriotic cheers before the audience settled down to an action-packed Bollywood movie that has helped fuel a nationalist frenzy as a new cross-border conflict simmers. Released at the beginning of the year, Uri: The Surgical Strike was one of Bollywood’s biggest hits even before this week’s raid by Indian forces on a militant camp inside Pakistan renewed viewers’ appetite for the blockbuster.

Since Tuesday’s strike, Indians have started flocking again to the movie, which dramatizes alleged raids in 2016 by Indian commandos along the border with Pakistan, after 19 soldiers were killed in an attack on an Indian army base at Uri in Indian-Occupied Kashmir.

Economics student Shailaja Kumar was overcome seeing Uri for a second time on Wednesday, just as India and Pakistan announced they had shot down each other’s jets. “I could not stop crying during the film while following news on the attacks at the same time,” she said at a multiplex cinema in New Delhi’s upmarket Chanakyapuri neighborhood. “With all that is going on in the country at the moment, this movie has made a big impact and I will definitely see it again.”

Vinod Jain, a retired banker who went with his family, quoted the words of the film’s protagonist played by actor Vicky Kaushal, saying, “I could feel the josh”—a Hindi word meaning “fervor” that has become a political buzzword since the movie’s release. Jain said Uri, which reportedly earned $50 million in less than eight weeks, “deserves to be exempted from the entertainment tax.”

The timing of the Hindi-language film, the directorial debut of 35-year-old singer Aditya Dhar, could not have been better.

Trade analyst Akshaye Rathi said that the film “will definitely get another boost and continue to dominate in theaters and probably earn more in the next few weeks.” And the movie’s backers are not the only ones looking to benefit from the surge in nationalism.

The film’s catchphrase—“how’s the josh?”—has become one of the most quoted on and off social media, with government ministers deploying it at public gatherings as they hope to channel the fervor into votes.

The government of Prime Minister Narendra Modi blamed the Uri attack in September 2016 on Pakistan-based militants. It has once again accused Islamabad of backing militants responsible for a suicide bombing in Kashmir on Feb. 14 that left 40 troops dead.

Following this week’s raids, India’s nationalist leader is now looking to spark “josh” among voters as he prepares to call national elections.

Director Dhar has faced criticism for making nationalism a key plank of the film, which features lines like “It is time to seek revenge—an eye for an eye” and “This is a new India—we will enter your house and we will kill you.” But the filmmaker is unrepentant, telling the website Bollywood Hungama that, “Indians are very angry…. I think Uri reflects that anger.”

“Indians have found a voice of protest in that film which does not shy away from naming Pakistan as the enemy.”

The larger-than-life portrayal of the 2016 strikes is just one of the many outlets that Indians have found to celebrate the military action against Pakistan.

Thousands sang and danced on Wednesday at the Wagah border crossing with Pakistan where each day at sunset, soldiers from the two sides put on a spectacular show as they bring down their rival national flags.

Stores across Delhi and other cities have put up signs paying tribute to the 40 paramilitaries killed in Kashmir earlier this month. Passengers told of how on an Indigo flight from Lucknow to Delhi late Tuesday, the pilot welcomed everyone aboard by lauding the Indian air force strike. “Everyone clapped and shouted ‘Jai Hind’ [Salute to India],” said one passenger.