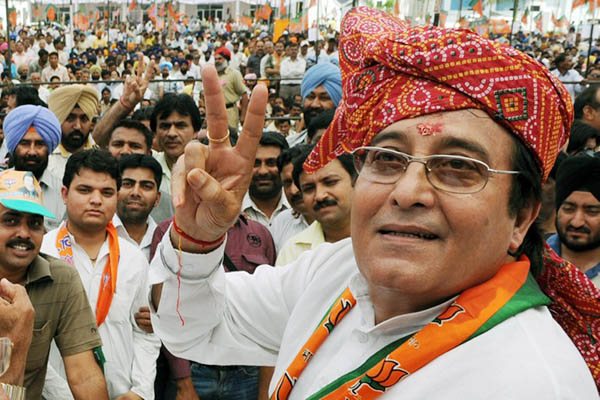 Tributes poured in from the world of Hindi cinema for the award-winning actor, who was lauded for his roles playing angry young men in the 1970s. Khanna was also an M.P. in the northern state of Punjab.

“Veteran actor and Member of Parliament Mr. Vinod Khanna, who was admitted to the Sir HN Reliance Foundation Hospital breathed his last at 11:20 a.m. due to advanced bladder carcinoma,” it said.

Khanna made his acting debut in 1968 in Man Ka Meet but is best remembered for his performances in Mera Gaon Mera Desh, Mere Apne, Achanak and Amar Akbar Anthony, where he appeared alongside superstars Amitabh Bachchan and Rishi Kapoor.

“Remembering the good times with you, Vinod. Thank you for being my friend,” Kapoor wrote on Twitter. “#VinodKhanna will always remain the coolest and most good looking actor to grace the Indian screens. The industry has lost a legend today,” tweeted actor Varun Dhawan. Actor Akshay Kumar posted: “Sad to learn about the passing away of #VinodKhanna Sir, one of the most charismatic actors… truly end of an era. Condolences to the family.”

Khanna received plaudits for his performance as an angry anti-hero in Mere Apne and as a violent villain in Mera Gaon Mera Desh, aggressive roles that bucked the trend of polite, romantic leads favored by Bollywood directors.

Khanna won a Filmfare Best Supporting Actor Award in 1975 for his role in Haath Ki Safai. In 1999 he was given a lifetime achievement award. He last appeared on the silver screen in the 2015 film Dilwale.