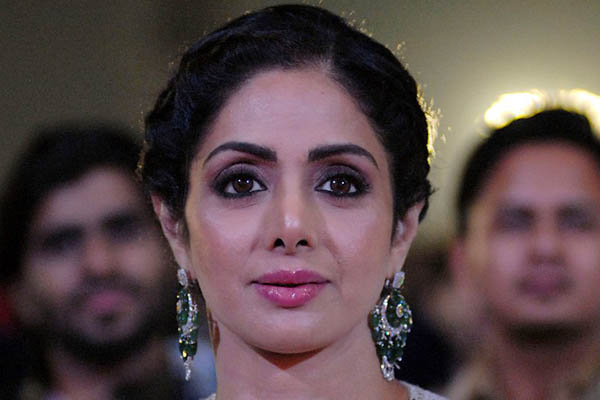 Bollywood superstar Sridevi Kapoor, one of the biggest names in Hindi cinema, has died aged 54 after suffering a heart attack in Dubai, her former manager said on Sunday.

The death of Sridevi, reportedly while attending her nephew’s wedding in the emirate late Saturday, prompted an outpouring of grief from fans and fellow actors as well as condolences from Prime Minister Narendra Modi.

“I have no words. Condolences to everyone who loved Sridevi. A dark day. RIP,” tweeted actress Priyanka Chopra.

Sridevi, born Shree Amma Yanger Ayappan in the southern state of Tamil Nadu, made her acting debut at the age of four and her career spanned more than four decades. She worked in India’s regional Tamil, Telugu and Malayalam-language films before making her Bollywood debut in 1979.

“It is shocking and sad,” her former manager Punkej Kharbanda told AFP. Her husband was with her at her death, he said.

Sridevi made a name for herself with a string of blockbuster films including Chandni, Mr. India, Mawali and Tohfa.

Her first smash hit was the 1982 Tamil film Moondram Pirai and she played the same role in its Hindi remake, Sadma. Her portrayal of a woman suffering from amnesia has been described by many critics as a milestone.

Kamal Haasan, her co-star in Sadma, paid tribute on Twitter. “Have witnessed Sridevi’s life from an adolescent teenager to the magnificent lady she became. Her stardom was well deserved,” Haasan tweeted. “Many happy moments with her flash through my mind including the last time I met her. Sadma’s lullaby haunts me now. We’ll miss her,” he added.

Local police made arrangements to handle the swelling crowds gathered outside Sridevi’s home in Mumbai’s Lokhandwala neighborhood. Many were expected to wait till the family returns to Mumbai late Sunday evening with the body, for a cremation likely to be held on Monday.

“I came rushing here after reading news pertaining to Sridevi’s death. She was our female Amitabh Bachchan [one of the biggest Bollywood stars] and I have watched all her movies,” Vimal Khandakade told AFP. “I have always been a big fan and loved her performances… I will wait till her body is brought back and want to bid her farewell.”

Shoumik Mahapatra, 16, said he had grown up watching Sridevi’s movies: “She was so colorful and bold and I was always impressed by her character. I am very shocked by the news.”

In an interview with The New Indian Express in 2013, Sridevi spoke of missing out on a carefree childhood when she began working as an actor. “I lost out on going to school and college life but I got into the film industry and worked without a gap—from child actor I went straight to heroine. There was no time to think and I was grateful for it,” she said. “In order to get something you have to lose something. You can’t have everything in life. So I am happy with what I got.”

Sridevi was awarded the Padma Shri, India’s fourth highest civilian award, for her services to the film industry. She was especially admired for her ability to overcome language barriers and work in different regional film industries.

Sridevi appeared in around 300 films and was set to see her older daughter Jhanvi make her Bollywood debut.

“A dream for many, had the good fortune of sharing screen space with her long ago and witnessed her continued grace over the years,” Kumar tweeted.

Madhuri Dixit, whose fame rivaled Sridevi’s, said the world “has lost a very talented person who left behind a huge legacy in film.”

Prime Minister Modi said he was saddened by the news. “She was a veteran of the film industry, whose long career included diverse roles and memorable performances,” Modi tweeted. “My thoughts are with her family and admirers in this hour of grief.”

Film critic Rajeev Masand said Sridevi “would be missed,” noting the star’s shy and introverted off-camera personality. “Never known anyone who was so painfully shy, so quiet off screen, who just transformed into a force of nature when cameras came on,” Masand tweeted. “She was an interviewer’s nightmare, but the movie-buff’s dream… Thank you for the movies.”

Sridevi is survived by her husband, film producer Boney Kapoor, and their two daughters.