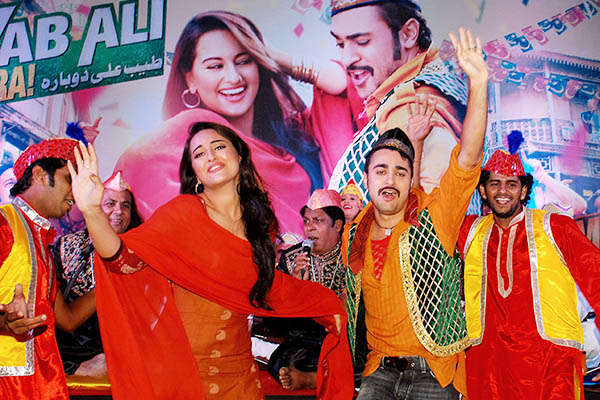 A promotional event for Once Upon a Time in Mumbaai Dobara. AFP

A string of Bollywood releases this year highlights the Indian film industry’s ongoing fascination with Mumbai’s underworld, following a murky history of links between the mafia and the movie business.

Spy thriller D-Day, which opened in Indian cinemas on Friday, is one of three new Hindi films that appear to draw inspiration from the lives of Mumbai’s notorious gangsters. Directed by Nikhil Advani, D-Day tells the story of Indian intelligence agents trying to capture “India’s most wanted man” from Pakistan, known in the film as “Iqbal” or “Goldman.”

The character, played by veteran star Rishi Kapoor, bears a striking resemblance to former Mumbai mafia don Dawood Ibrahim, one of India’s real-life, most-wanted men. Like the film’s antihero, Ibrahim is known for donning a thick moustache and sunglasses, is thought to be in Pakistan and is the alleged mastermind behind the 1993 bomb blasts in Mumbai which killed 257 people.

“We have used real life events as triggers to create a public enemy and tell a story with fictionalized situations, without going into the main character’s back story,” said the director. When asked about the likenesses to Ibrahim, he said: “A hint is enough for the intelligent.”

The upcoming thriller Once Upon a Time in Mumbaai Dobara looks at a love triangle involving a gangster called Shoaib Khan, who may also be inspired by Ibrahim. “The characters are based on research and references. But unlike real world dons, our cinematic dons sing on rooftops and are flamboyant. Ours is a work of fiction,” said the film’s director Milan Luthria. Its 2010 prequel Once Upon a Time in Mumbaai told the story of Sultan, rumored to be based on late gangster Haji Mastan, but the filmmakers released a statement denying this after Mastan’s family took the matter to court.

It is a scenario Sanjay Gupta was keen to avoid in his film Shootout at Wadala, released in May, about the rise of a gangster called Manya Surve who was killed in 1982 by Mumbai police. While Surve’s name stays the same in the film, those of several other principal characters were changed just before the release. Gupta said there were grey areas in the law and that it was difficult to know exactly who would be angered by any perceived likenesses. “My wife was most relieved when we decided to change the names,” he said.

Shootout at Wadala is based on a chapter from crime reporter S. Hussain Zaidi’s book Dongri to Dubai: Six Decades of the Mumbai Mafia. Zaidi has written about the underworld’s links to the Hindi-language movie business. The connections ran deep in the 1980s and 1990s, when the film industry depended on the underworld for funding. Extortion, kidnapping, threats, and shootings were signs of how the two worlds appeared to collide. Before he fled India in the early 1990s, Ibrahim himself was photographed alongside various Bollywood stars at social events, underlining the once-extensive connection between the worlds of glamour and guns.

“Before corporatization, the mafia would invest in films to convert their ‘black money’ to white. They wanted to dictate terms to film producers and directors by threatening them or extorting money,” said Zaidi. “In some cases, dons tried to get access to heroines by funding films, and access to a don became a status symbol for some Bollywood personalities.”

A leaked U.S. cable from the Mumbai consulate in 2010 said the film industry “welcomed funds from gangsters and politicians, looking for ways to launder their ill-gotten gains.” The cable noted that after the government gave the film business formal industry status in 2000, meaning banks were allowed to lend to moviemakers, “the corporatization of Bollywood—and the wider entertainment industry—began.”

The most recent reminder of the old connections was the return to jail in May of Sanjay Dutt, an actor who was convicted for possessing guns supplied by the gangsters behind the 1993 attacks.

While the industry since appears to have cleaned up its real-life links, Bollywood has continued its love affair with the underworld on screen. This fascination has been evident ever since Bollywood legend Amitabh Bachchan made his name, often playing a don or smuggler in films such as Deewar and Don. The films have usually been part fictionalized, although an exception was the 2004 docudrama Black Friday, which recreated events leading up to the 1993 blasts and the hunt for its perpetrators.

Zaidi again wrote the book behind the film, the release of which was stayed by a court for two years and could only go ahead after the completion of the serial blasts trial. He says: “We didn’t change the names and were ready to face the repercussions.”