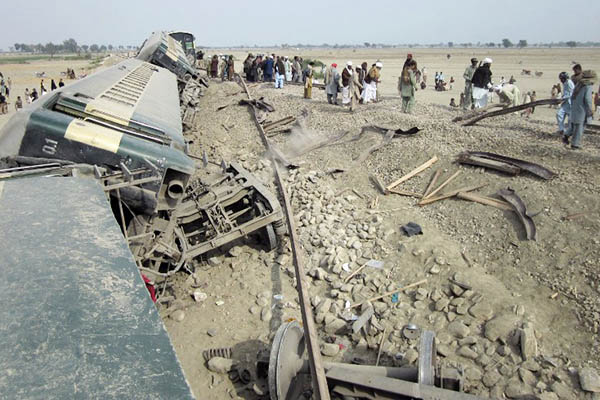 A Karachi-bound route was bombed in Rajanpur, January 2014. Arslan Iqbal—AFP

Three wounded in attack on Bugti Express traveling to Quetta from Lahore.

A bomb hit a passenger train in Balochistan on Thursday, derailing it and wounding three passengers, officials said.

The bomb in the Dasht region hit the moving Bugti Express about 30 kilometers before its final destination of Quetta, the provincial capital of Balochistan. The train was coming from Lahore.

“A bomb blast derailed the engine and three bogies of Bugti Express as a result of which three passengers were wounded,” said local security official Ameer Hamza. He said the wounded were transported to hospital in Quetta by road.

Nobody immediately claimed responsibility, but Baloch separatist rebels active in the area have recently intensified attacks against ethnic minorities and outsiders. The rebels often attack government forces, installations and settlers from Punjab.

Last month the Human Rights Commission of Pakistan said that more than 300,000 people including minority Shia Muslims and Hindus had left Balochistan over the past 10 years due to rising unrest.