Bomb Detonates on Bus in Peshawar 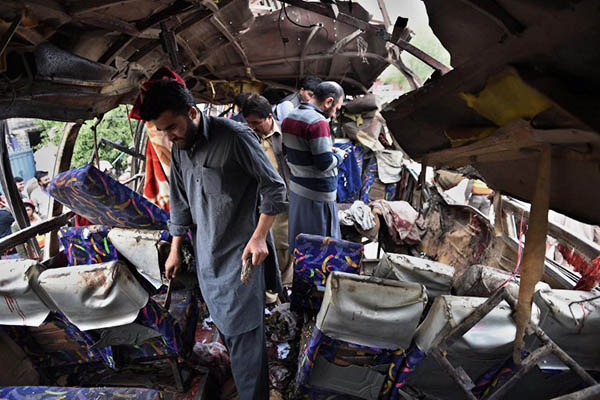 At least 17 people killed, another 47 injured in explosion that ripped through bus carrying mostly government employees.

At least 17 people were killed and dozens wounded on Wednesday when a bomb exploded inside a bus in Peshawar, officials said.

The Lashkar-e-Islam, a militant group allied with the Pakistani Taliban, claimed responsibility for the explosion, which happened as the bus carrying mainly government employees was passing through the city’s crowded shopping district of Saddar. The group claimed in a statement that the attack was retaliation for the military sentencing 13 militants to death a day earlier.

“Another injured from the bus blast has expired and the death toll is now 17,” said Jamil Shah, a spokesman for Peshawar’s Lady Reading Hospital. “A total of 47 wounded were brought to hospital and many have been discharged after first aid. Five people among the 19 injured admitted are still critical,” the spokesman said. Senior police official Kashif Zulfiqar confirmed the latest toll.

Bomb disposal officials said a four-kilogram improvised explosive device had been planted near the bus’s gas cylinder and appeared to have been detonated remotely. “The IED was fitted with ball bearings and was planted beneath the sixth row of seats from the back,” police official Abbas Majeed added.

Majeed told reporters at the scene the bus was carrying government employees from Mardan to Peshawar.

Rescue workers carried the injured from the blue bus on stretchers to waiting ambulances. A survivor said the vehicle appeared to leap in the air after the explosion.

“A huge blast occurred and I felt that the bus had jumped in the air. I could only see flames and smoke in the rear of the bus. People started crying. I got an injury on my head and light wounds on the body,” said Faqir Gul, 32, a shopkeeper from Charsadda district.

Pakistan’s Islamist insurgency began after the U.S.-led invasion of neighboring Afghanistan in 2001, which led to a spillover of militants across the border and a surge in recruitment for Pakistani extremist groups. The conflict reached new heights in 2007 when various militant factions came together under the umbrella Pakistani Taliban group.

The group entrenched itself in the country’s northwestern border tribal areas and made territorial gains. The Army launched the latest of a series of offensives in the region in 2014 to try to wipe out militant bases and end the insurgency that has cost thousands of lives.

Overall levels of violence have fallen, with 2015 seeing the fewest civilian and military and police casualties since 2007. But the militant group is still able to carry out periodic bloody attacks, particularly in the northwest.