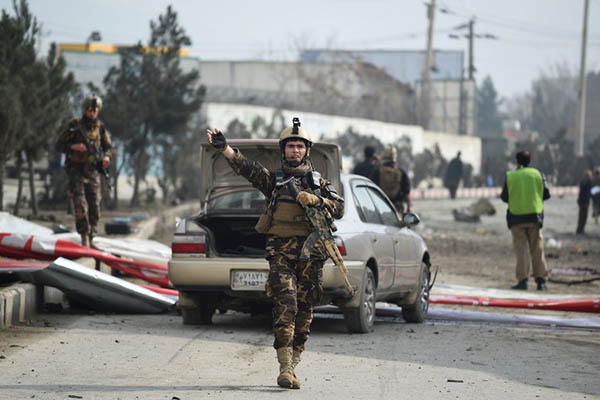 Extensive damage to the facades of nearby houses could be seen with debris scattered on pavements as witnesses reported a strong explosion.

Security forces rushed to the scene as passers-by helped move the wounded, with witnesses complaining to AFP that ambulances took around half an hour to arrive. A horse was also badly injured in the blast and could be seen stumbling in the street—its head, belly and legs burnt—before it was finally taken pity on and killed on the spot with a knife, an AFP reporter at the scene said.

There was some confusion over the target of the bomb. Earlier, interior ministry spokesman Najib Danish said the “suicide” blast had targeted “a foreign forces convoy” when it went off around 9:00 a.m. in the Qabil Bay area of Kabul.

However, a NATO spokesman denied any foreign troops had been injured, while the Australian embassy said the blast had come as one of its convoys was passing by. “I can confirm a vehicle-borne improvised explosive device (VBIED) was detonated this morning in Police District Nine in Kabul City,” Captain Tom Gresback, spokesman for NATO’s Resolute Support mission in Kabul told AFP.

“One civilian was killed, and 11 civilians were wounded as a result of the attack. No Resolute Support service members were injured in the incident,” he said, condemning the attack and adding that NATO “fully endorses” a call this week by President Ashraf Ghani for the Taliban to join peace talks.

The Australian embassy said on its website that the blast was “near Australian Embassy vehicles while they were traveling in Kabul,” adding that all staff were safe and extending its condolences to the victims of the attack. A security source confirmed the embassy’s account to AFP.

No group has claimed the attack, which is the latest to hit Kabul, one of the deadliest places in Afghanistan for civilians as both the Taliban and the expanding Islamic State group step up their assaults on the city. The interior ministry, which gave a higher figure of 22 wounded, said the one fatality had been a 12-year-old boy.

The bombing comes just two days after Afghan president Ashraf Ghani unveiled a plan for peace talks with the Taliban, including a proposal to eventually recognize them as a political party.

Ghani revealed his plans in a speech during international peace talks in Kabul this week that went better than expected, with officials in Washington daring to hold out hope that the longest war in U.S. history may be heading to a negotiated settlement.

U.S. ambassador in Kabul John R. Bass hailed Ghani’s “very courageous stand” and his “commitment to pursue a peaceful settlement through talks” after more than 16 years of conflict, as officials said the onus was now on the Taliban to respond.

Before Ghani’s speech, the militants had called for direct talks with the U.S. They have not yet offered a full response to the president’s proposal, but the apparent openness to negotiations on both sides has sparked cautious optimism.

More than 16,000 foreign troops are deployed in Afghanistan under the NATO mandate, mostly Americans who supervise Afghan forces and conduct counter-terrorism operations.

Since November, the U.S. military has increased airstrikes against Taliban positions, training camps and heroin laboratories, which are an important source of revenue for the group.

Despite the optimism, Kabul remains on high alert, fearing further violence. American officials are also braced for more fighting in the spring. Since mid-January, militants have stormed a luxury hotel, bombed a crowded street, raided a military compound and launched a suicide attack during morning rush hour in the capital, killing more than 130 people.