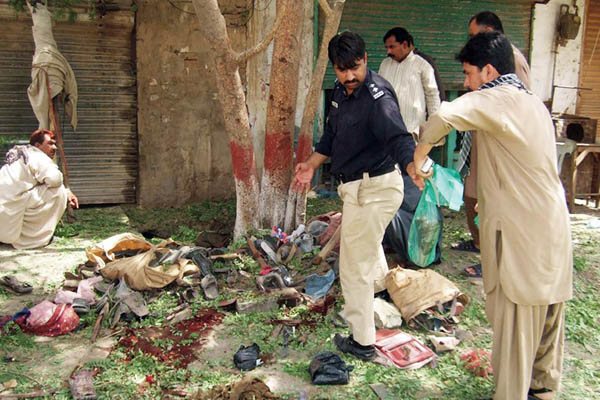 Three people were killed and 20 injured when a bomb planted on a motorcycle exploded Sunday in Balochistan province, officials said.

The bomb went off in the town of Sibi, with senior police official Ghulam Ali Baloch, who gave the casualty toll, saying two of the injured are in critical condition. “The bomb was planted in a motorbike. We are investigating the possible targets but we have not found any specific target yet,” Baloch said.

Nobody has claimed responsibility as yet but Baloch separatists demanding greater autonomy have been waging an insurgency for years.

Resource-rich Balochistan is the largest of Pakistan’s four provinces, but its roughly seven million inhabitants have long complained they do not receive a fair share of its gas and mineral wealth. Rebels began their fifth insurgency against the state in 2004, with hundreds of soldiers and militants killed in the fighting since then.

A prominent Pakistani rights activist was shot dead in Karachi late Friday, minutes after she hosted a seminar on abuses in Balochistan. Human rights groups have long accused security forces and intelligence agencies of serious abuses in the province. They deny the allegations.