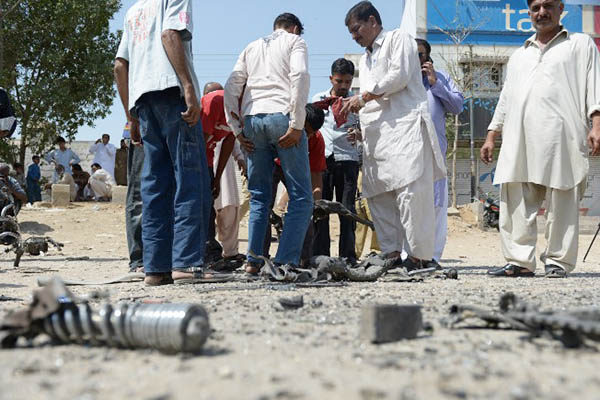 Taliban claim responsibility for attack that also left 14 others wounded.

A Taliban bomb blast hit a police van in Karachi on Friday, killing at least two policemen and wounding 14 other people, officials said.

Karachi, Pakistan’s economic heart and home to some 18 million people, is rife with criminal, ethnic, political and sectarian killings, which claim hundreds of lives each year. Security forces have been cracking down on criminal and militant activities since late 2013, suffering reprisal attacks in return.

“Two policemen were killed and 14 other people, including two civilians, were injured when a bomb planted on a motorbike was blown up as a police van was passing by,” said Karachi police chief Ghulam Qadir Thebo. He said the officers belonged to the Special Service Unit, an elite squad that guards VIPs, and were on their way to guard Bilawal House, the residence of former president Asif Ali Zardari.

The Pakistani Taliban claimed responsibility for the attack in an email sent to the media. The militants, who have been targeted by a major military operation since June last year, also claimed a rocket attack in Balochistan province on Thursday that killed four policemen.