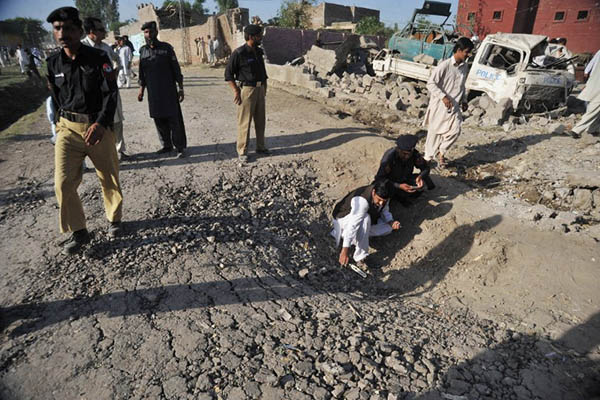 Investigators collect evidence at the site of a blast in Charsadda, 2011. A. Majeed—AFP

At least seven people, including six police officials and a 12-year-old student, were killed and 11 others injured in a bomb attack targeting a police van in Khyber-Pakhtunkhwa province.

The blast occurred in the Sir Dheri Bazaar of Charsadda, 15 kilometers from provincial capital Peshawar. “At least seven people were killed and 11 others injured,” said district police officer Shafiullah Khan. “We are examining the nature of the blast,” he said, adding: “It was a remote control blast planted on a bicycle and contained 4-5 kilograms of explosives.”

A senior hospital official also confirmed the casualties. “We received six bodies and eight injured,” he said from the nearby District Headquarters Hospital.

Wednesday marked the second day of a polio vaccination campaign at the Basic Health Unit of Sir Dheri. “Police were going to provide a security escort to polio vaccinators when they were attacked,” said Khan. He said the police vehicle had been heavily damaged by the blast and security forces had cordoned off the area.

While no group has claimed responsibility for the attack, the Pakistani Taliban and their militant affiliates often target security officials and health workers. On Tuesday, three polio workers were killed in Karachi, prompting the suspension of an inoculation campaign in Sindh province.