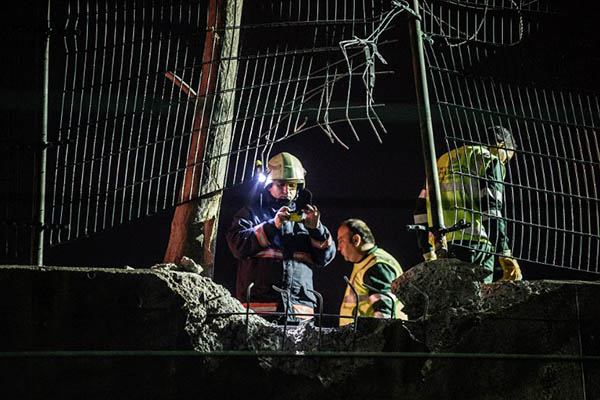 An explosion caused by a homemade bomb rocked an Istanbul metro station on Tuesday, triggering panic in the evening rush hour and wounding up to half a dozen people.

The local mayor and the state-run Anatolia news agency confirmed a bomb caused the blast, which came at a time of growing jitters over security in Istanbul and the risk of a militant attack in Turkey’s largest city. The blast, which was heard in several areas of the city, hit an overpass close to the metro station in the Bayrampasa district of Istanbul.

“Five of our citizens were injured when a pipe bomb left on barriers on the overpass exploded,” Atilla Aydiner, the district mayor, told A-Haber television. Security sources were also quoted by the Dogan news agency as saying the blast appeared to have been caused by a homemade bomb.

The metro system in Istanbul was brought entirely to a halt after the blast, the municipality said, although normal service was gradually restored. Other reports had said the cause of the blast could have been linked to an electrical transformer and that six people had been injured.

Video footage on Dogan showed large sparks shooting out like fireworks from the overpass, lighting up the sky near the height of evening rush hour. Dogan also said a truck on the overpass was damaged by the explosion with holes on its windscreen, while other pictures showed a bus with blown-out windows.

Large numbers of ambulances were dispatched to the scene, as commuters were helped to safety, reports said.

Anatolia said it was being investigated whether the bomb had been aimed at a police bus that was damaged in the attack. There was no immediate claim of responsibility for the explosion.

“The cause of the explosion is not clear. We are investigating all possibilities,” Istanbul governor Vasip Sahin was quoted as saying by Anatolia. He gave a lower toll of just one person injured. “It was a large explosion, right in a central location and in a busy place but fortunately there was no loss of life.”

Turkey is on alert for attacks after 103 people were killed on Oct. 10 when two suicide bombers ripped through a crowd of peace activists in the capital Ankara, the worst attack in modern Turkey’s history.

Turkey has in recent weeks detained several suspected members of the Islamic State group with officials saying they were planning attacks in Istanbul. The Paris attacks on Nov. 13 that left 130 people dead and were claimed by the Islamic State group also raised fears over Istanbul’s potential vulnerability to a similar assault.

But Turkey is also waging an all-out assault on the outlawed Kurdistan Workers Party (PKK), who have staged dozens of deadly attacks against members of the security forces but largely in the southeast of the country.

Meanwhile, the banned ultra-left wing group the Revolutionary People’s Liberation Party–Front has also staged a string of usually small-scale attacks in Istanbul over the last months. There have been repeated security alerts on Istanbul’s expanding metro system in the last months but until now all had proved to be false alarms.